Cambridge Man Gets The 'Life-Changing Lift' He Deserves

Symptoms of IBM initially include the progressive weakening of the wrist and finger muscles, the front thigh muscles and the muscles that lift the front of the foot. This meant that Mr. Knowles was finding the stairs in his two-bedroomed Victorian terrace home extremely difficult to manage.

Unusually, the two bedrooms were downstairs and the kitchen, living room and bathroom were upstairs so it was essential that Mr. Knowles could find a mobility solution to help him move between floors more easily. He had already decided against the idea of a stairlift after having been advised it was unsuitable for his needs. 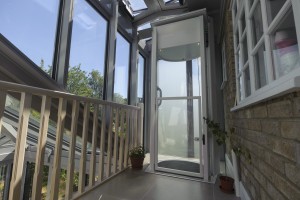 “It was taking me for ever to get up the stairs and it was very painful,” said Mr. Knowles, who shared his story with a special video on www.stiltz.co.uk. “A stairlift was not suitable at all. I could probably get myself on the seat but would not be able to get myself up out of it. An occupational therapist said a stairlift was out of the question for someone with my condition.

“Lots of friends suggested I move house and I did look at the possibility of a bungalow but couldn’t bring myself to leave the home I’d lived in for more than 20 years. Also, I can’t drive anymore so I didn’t want to move out of the city. Because where I live is right in the centre, it’s easy for me to get to the shops. In the end, I decided I would get an extension built and get a Stiltz home lift installed and it was the best decision. 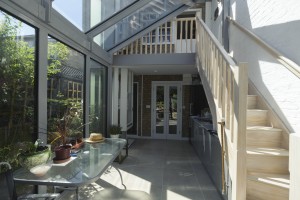 Mr Knowles chose the Stiltz Duo Vista home lift because he liked its contemporary look, it sits well with the extension, which resembles a conservatory. The lift car is manufactured from structural polycarbonate and its curved body is clear on all sides allowing natural light to flood in from the extension windows.

He said: “The Stiltz home lift has been truly life-changing for me. I can access the upstairs of my home now at the touch of a button. The lift is also great for carrying things like bags of food shopping up to the kitchen, whereas before I would really struggle to get both them and me up the stairs. I liked the design of the Vista because it is transparent on all sides and didn’t in anyway look like an unattractive, square, disabled lift.”

Buyers’ Guide – Getting Around Your Home

Accessible spaces for assisted or independent living with Bathstore

Helping to Prepare for the Cold Weather