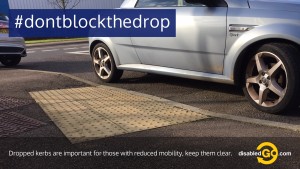 A national campaign by DisabledGo.com, the UK’s most popular and trusted Accessibility Checker, has highlighted a shocking number of dropped kerbs being blocked by a range of vehicles across the UK.

The ‘Don’t Block the Drop’ campaign launched in early 2016 to raise awareness of the serious issues that blocking dropped kerbs cause disabled people and those with reduced mobility.

More than 500 individual examples were collected by members of the public across the country and sent through to DisabledGo.com via social media.

DisabledGo will be sharing the results of the survey and campaign with the police and parking enforcement teams in the hope that the issue will be brought to the forefront and that law enforcement on this matter will be taken more seriously.

The results highlighted that this is a national problem, with no regions offences more prevalent than another.

However, the findings did show that 67% of all cases collected were private vehicles. Other significant blockers were tradesmen with 14% and delivery drivers with 6%.

Karen, a mobility scooter user from Derbyshire, was actively involved with the Don’t Block the Drop campaign and has said:

“People think it is OK to park on dropped kerbs, even though it is actually illegal. I find it extremely inconsiderate of drivers when you consider that the point of these crossings is so that people with reduced mobility or buggies and prams can navigate roads and pavements safely.”

Karen became a scooter user in 2011 and has realised the ignorance of drivers in her local area. She suggested the use of bollards on each side of the blocked kerbs as a solution to stop people parking across them, and make it much safer for people who need them.

Commenting on the findings of the campaign, Barry Stevenson, Chairman of DisabledGo said:

“DisabledGo.com has highlighted an issue that impacts 1000s of disabled people every day. If drivers were more considerate, and the Police and Traffic wardens more vigilant this problem could be dramatically reduced. The stress, inconvenience and impact on personal safety for disabled people cannot be exaggerated and we really do think that government and local authorities could make a big difference if they focused on this.”