Columnist: Harry Wade - Hop To It! 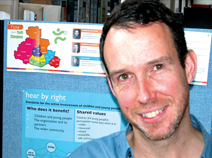 I’ve had over 50 years practice at being active and getting around with an artificial leg. I’m really quite good at it most of the time. I have a knee; well two actually, and obviously this helps to control the plastic and metal appliance secured on the end.

My operation scars are well-healed (even if my dress sense isn’t!); my calluses are well-developed around the knee – I’m a ‘patella tendon bearing’ because I bear the weight just below my knee. And the technology has developed over the years to give me flexi-feet, bendy-ankles in four directions and, most importantly, a robustness that means it doesn’t break when I get really active. I move around. But sometimes I can’t or don’t wear my leg.

Sometimes that is because I get a wound. The patella tendon can’t bear it anymore. It may be a blister caused by ‘overdoing it’ or even just a new pair of shoes with a different angle from a different sized heel. More often it’s because the hassle of putting my leg on is not worth it just for a short journey in the house. At night I take my leg off. You wouldn’t wear your shoes in bed and I don’t wear my hard, unyielding leg in bed either. It’s more comfortable without and, anyway, my wife wouldn’t appreciate the bruising. But first thing in the morning, a nip to the loo and then the shower, doesn’t usually merit putting my leg on. So every time I’m sore and usually when I’m first up, I hop. The prosthetists and the physios don’t like it: “Too unsteady and dangerous” they cry. But it’s so much easier to hop to the shower in twenty bounds and even shake myself dry on the way back! I move around. But sometimes I can’t or don’t hop.

It’s true, my waist measurement is no longer 32” as it was in my prime. After 50 years of hopping, and now carrying a slightly heavier load, my trusty hopping knee sometimes objects to an invitation to bounce me to the bathroom. The joints are starting to ache a little. And, um, the occasional hangover… So when I make the tea in our bedroom, I can walk on my knees. I’m quite well balanced, but this only works on a nice soft carpet. I move around. But sometimes I can’t do any of these.

When I can’t walk, hop or ‘knee it’, I crawl. I don’t like it very much; it’s ungainly, undignified and it scuffs my knees. But I move around. I’ve got one leg, but I’ve also got ‘places to go and people to see’… Keep moving.

Harry Wade’s Autobiography: “Out On A Limb: Growing Up On One Leg” is available now. Email: outonalimb@hotmail.co.uk