Grace Mandeville (actress) and Linda Blacker (photographer) have teamed up to create a series of photographs showcasing disabled actors and models in roles which continuously go to able-bodied talent, challenging the industry to be more inclusive.

Disabled talent should be cast to play disabled characters over their non-disabled competition. Moreover, they truly feel that when a disabled actor is cast in a role, the focus shouldn’t have to be their disability.

Grace says “why can’t disabled actors be cast to play a prominent role in a romance film, a lawyer in a new TV show, or to be the star of a fashion campaign without the focus being their disability?”

Grace and Linda feel like it’s time to get this message out there in a big way, through powerful imagery and a united drive to make a difference.

The campaign showcases five posters with disabled actors starring in mock Hollywood hits, Rom Coms, or even a new TV show reading to smash the ratings with a disabled lead. 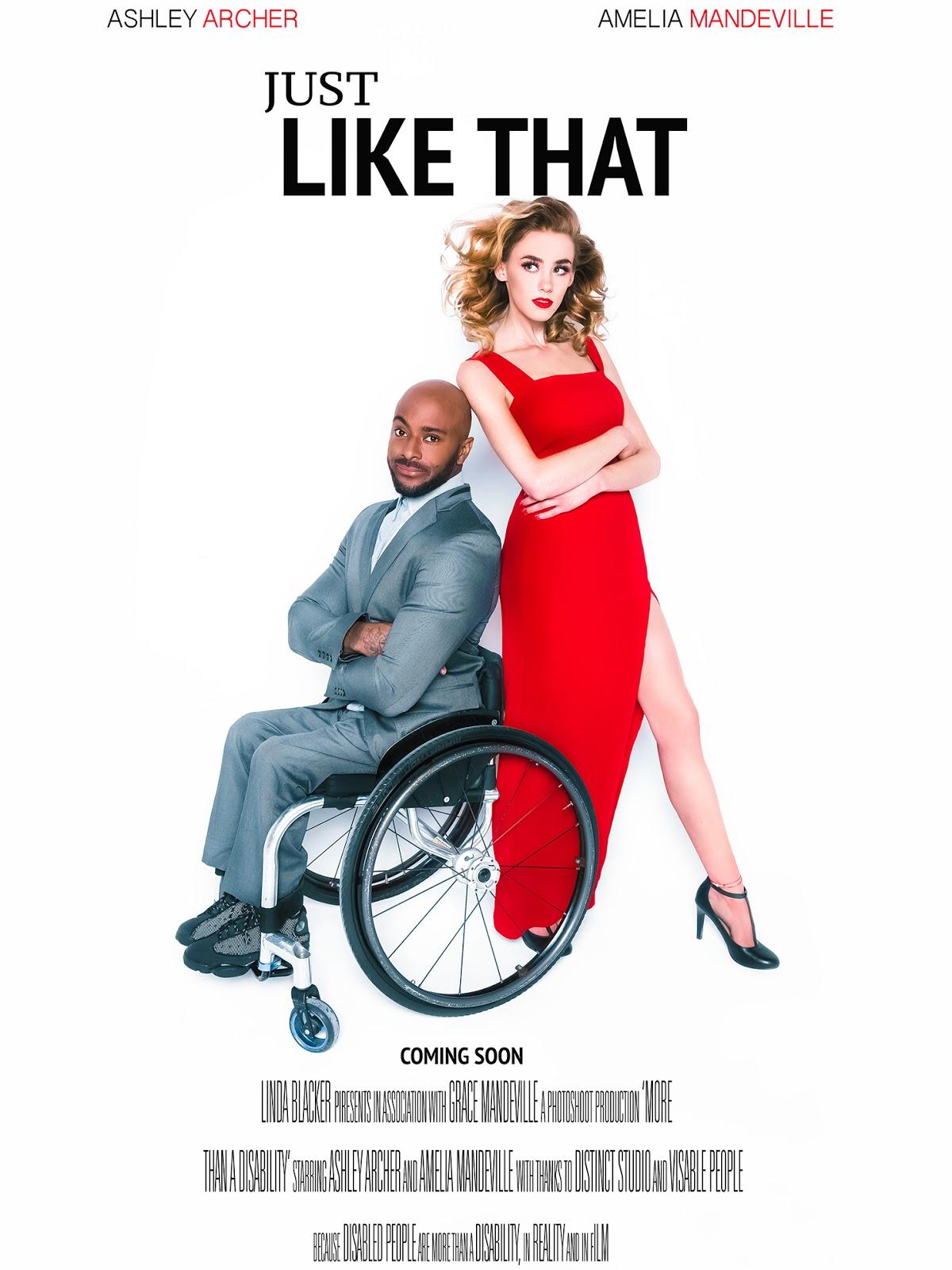 Above, actor Ashley Archer, is posing in his wheelchair. He’s the ‘lead role’ of a new pretend ‘Rom Com’ movie, besides a potential love interest. Ashley says, ‘I think that disability should not be seen as an obstacle and prevent opportunities being given to individuals.’

The benefits of hiring a well known non-disabled actor to star in a new TV show or blockbuster is pretty evident – they’re incredibly popular and they can sell tickets. However, disabled actors and talent are systematically denied opportunities so rarely cast in even the smallest roles, preventing them ever becoming huge stars themselves.

Linda says , in reference to abled actors being cast in disabled roles “From my perspective this would be fine IF disabled actors had the same opportunities that abled actors do.

As they don’t, the first stepping stone is at least casting disabled actors in disabled roles, as they are never cast in abled bodied roles.”

“It’s saying – well you can’t play abled bodied roles, but we also feel that able-bodied actors can play your roles better. In a fair world, where disabled actors have equal opportunities in roles, this wouldn’t be a problem, but it’s very far from that situation currently.”

Dwayne Johnson, known as ‘the Rock’, recently called for the industry to take steps forward to audition and cast actors with disabilities, after starring in his recent Hollywood action movie, ‘Skyscraper.’ It’s fantastic to see those with a voice speaking on such a topic, and it’s something we urgently need more of and hope that in the future Dwayne Johnson will decline roles that showcase a disabled character and encourage directors to cast disabled talent.

However, the issue spans across more than the film and TV industry. One billion people, or 15% of the world’s population, experience some form of disability. There are over 11 million people living with a disability in the UK alone. That’s a huge number of people who are substantially underrepresented in Film and Tv but also in the Advertising and Fashion industry.

Grace Mandeville actually features in the campaign as a model for a mock ‘Perfume Advert’ and deaf model, 7 year old Santiago Ospina Lozada, stars in a mock-up Fashion Advert. 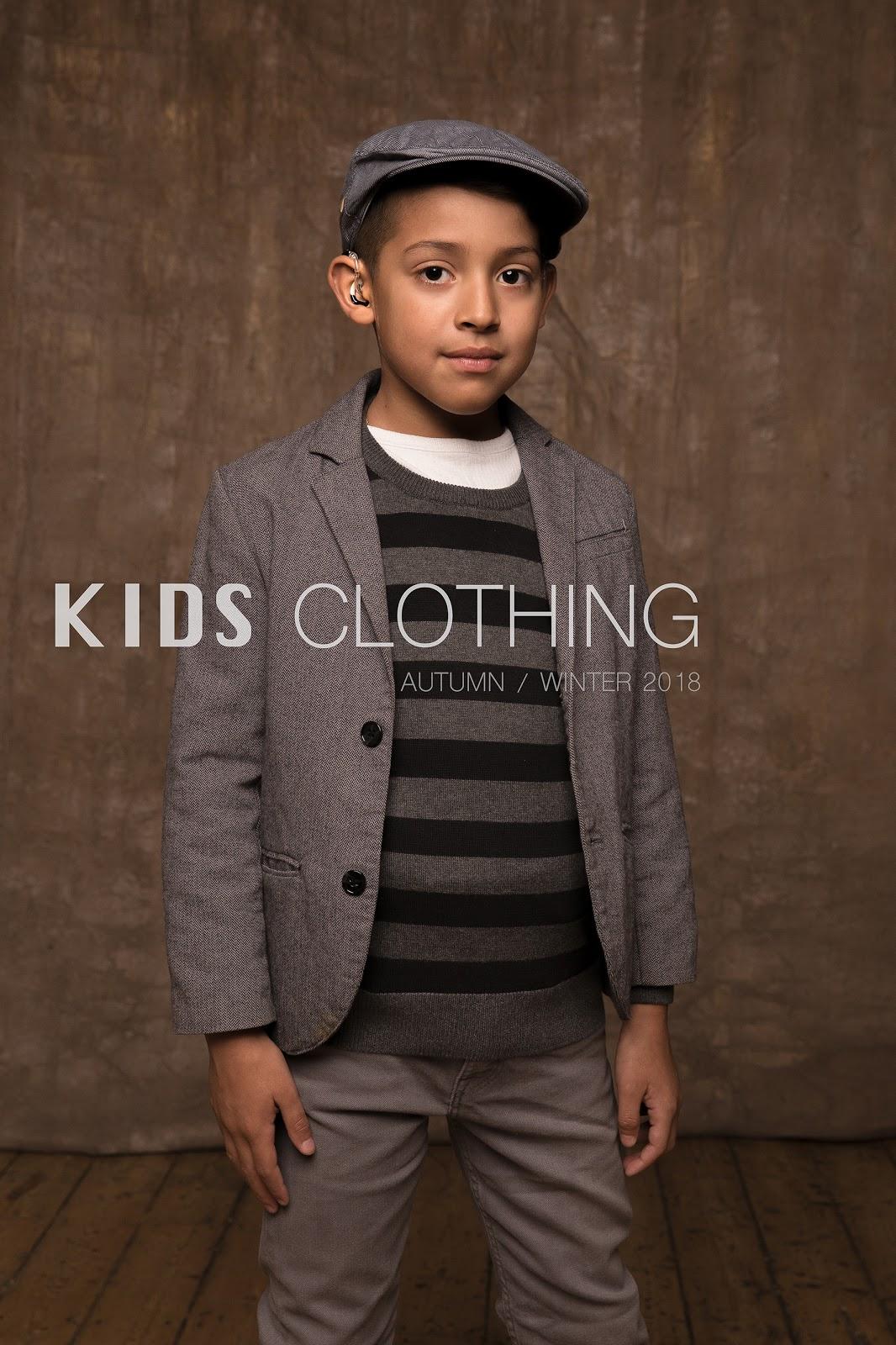 VisAble Talent and Zebedee management are both talent agencies who specialise in providing disabled talent to the advertising industry, television and film companies. They were key in helping Linda and Grace find the perfect talent for this campaign.

‘Change will only happen when we see some of our lead actors cast as characters in positions of power, where their disability is not the story.

A good way to make a difference immediately, is to also begin by casting artists with (irrelevant) disabilities, in the everyday roles where they portray the shopkeeper, the mother, the lawyer, the gardener, the drug dealer, the lover, the bank cashier. In other words any role where there is not reference to an impairment. Obviously their demographic has to be credible but we get far too many roles where the only opening for a disabled actor is a victim or a patient. This shows a paucity of imagination on the part of the casting office in my view and a waste of terrific talent.’ 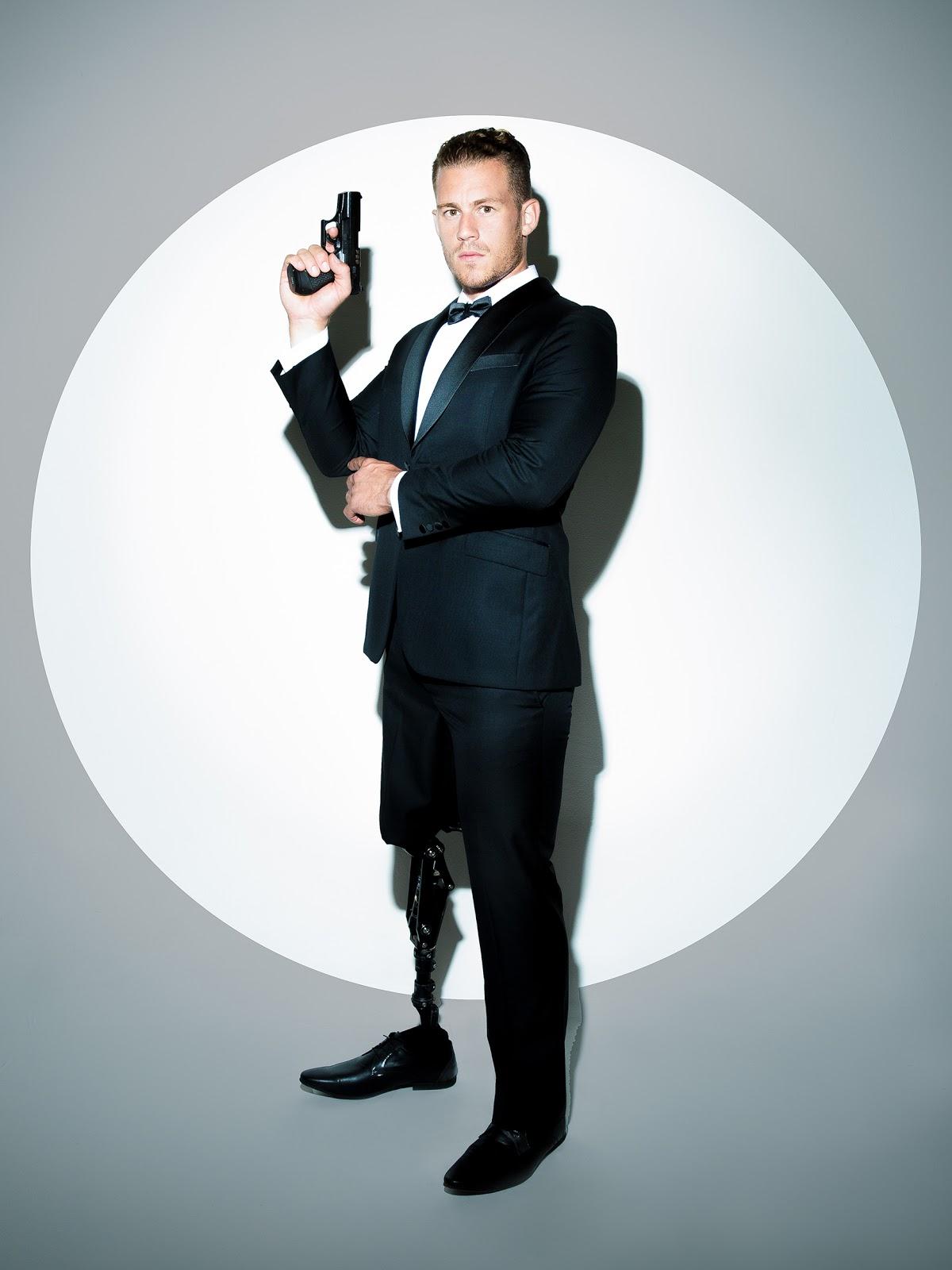 Jack Eyers, winner of Mr England in 2017, stars as a 007-esque character in one of the campaigns images. Jack is not only a talented model and actor, he’s also a GB Paracanoe athlete, showcasing how his disability would be no obstacle to the physical challenges of an action movie role.

Hannah Fisher, who stars in the TV Show poster image from the campaign, poses as a high school

TV show character, who is deaf in one ear and wears a hearing aid in the other. 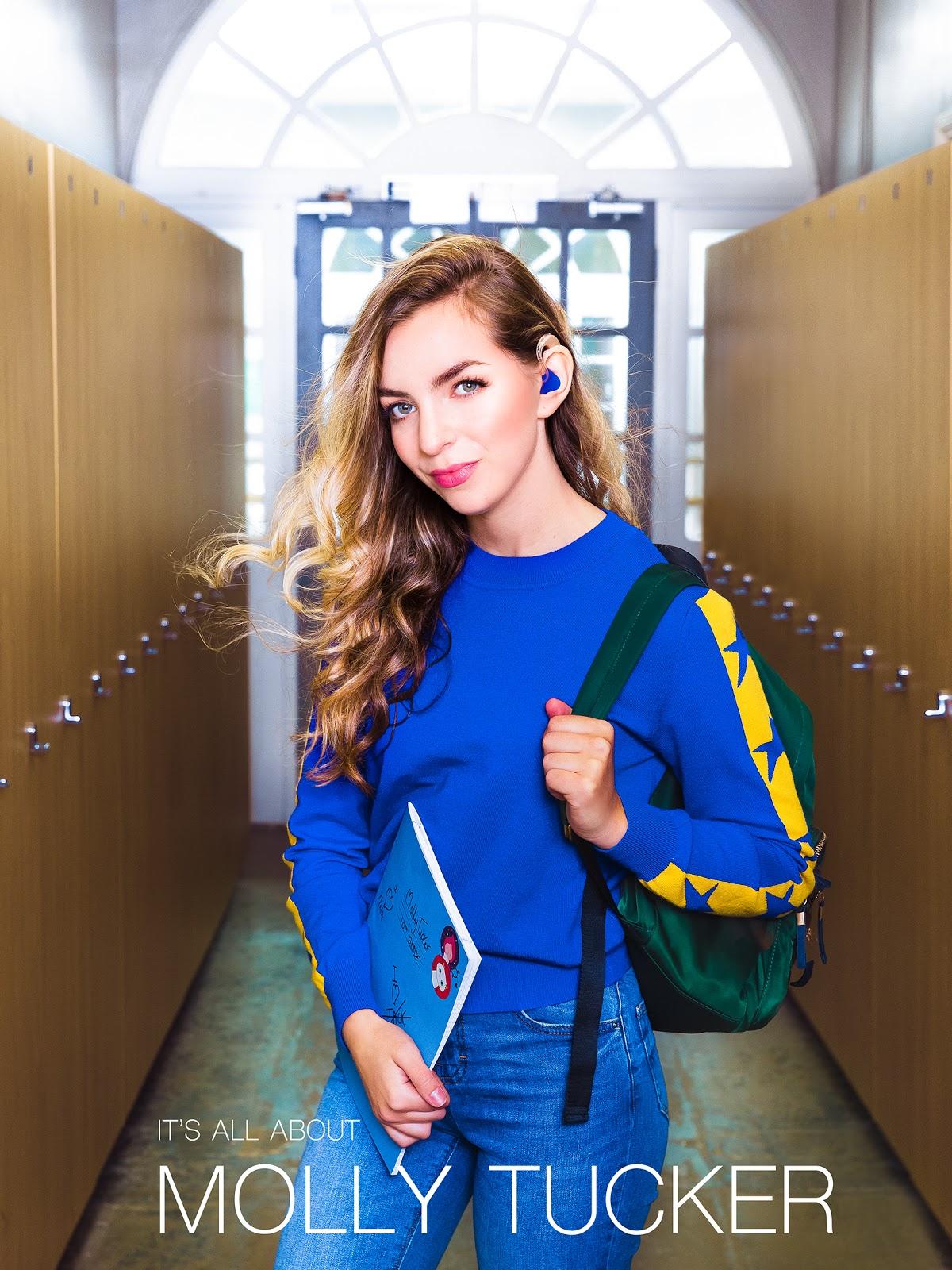 Hannah states ‘ As a model with a disability I believe the fashion and media industry could do more work to provide an equal playing ground for the currently underrepresented. By doing this, it will enable our diverse society to overcome stigma and marginalisation.’

Grace and Linda hope that this campaign can start a conversation and raise awareness on this issue, so that Film, TV, Advertising and Media as a whole can start truly representing disabled people across the board and showcasing their talent which is just waiting to be seen and heard.

Thanks to the following for making this campaign possible –

Linda Blacker is a London based campaign and portrait photographer who has worked with the likes of 20th Century Fox, Warner Bros and Stand Up To Cancer UK, amongst others, in the UK, and has travelled internationally to create imagery for clients.

Grace Mandeville is a British actress, vlogger, model, television presenter, and internet personality whom is extremely passionate about the portrayal of people with disabilities in the media. Grace was born with a foreshortened right arm, with her arm ending just below her elbow.

Grace Mandeville actually features in the campaign as a model for a mock ‘Perfume Advert’ and deaf model, 7 year old Santiago Ospina Lozada, stars in a mock up Fashion Advert.

Grace Mandeville (actress) and Linda Blacker (photographer) have teamed up to create a series of photographs showcasing disabled actors and models in roles which continuously go to able-bodied talent, challenging the industry to be more inclusive.

Student designs special ‘tactile tartan’ for those with visual impairments