Disabled Artists: The Agony And The Ecstacy

We often think of artists as expressing their pain and turmoil through paint and clay. Michelangelo was said to have experienced agony and ecstasy as he painted the ceiling of the Sistine Chapel. Of course, there have been a number of great artists that have created wonderful works whilst living with disability.

Disabled people have used art as an occupation during periods of recovery and as a way to express their feelings about the world and their place in it. Some disabled people have been all too aware of their disabilities and the way it has influenced or affected their artwork, whilst others haven’t – perhaps giving us a truly honest ‘picture’ of what they felt like.

Great art has been produced by artists with all manner of disabilities, proving that disability does not have to hold back anyone with a creative spirit and more importantly, that anyone can be an artist. Sensory, physically and mentally disabled artists have all made their mark on art history and continue to influence today.

Whilst disability has undoubtedly caused certain artists to adapt their methods, such as Matisse’s ‘cut paper’ technique it is more difficult to say whether disability has been a source of inspiration. Indeed, ‘inspiration’ is a difficult word to conjure with, given that it is so different from ‘influence’. Whilst there is little doubt that Vincent Van Gogh was influenced by his mental state, it is tricky to say for certain that he was ‘inspired’ by it. This is especially the case given that his condition eventually drove him to destruction, snuffing out one of the most prolific artistic talents in history.

Claude Monet was also influenced by his disability. It seems that his failing eyesight promoted a darkened palette that has become synonymous with his work. Even in his earlier work, his gratuitous use of pinks in the sky has become a beloved feature of his style. Take away Monet’s failing eyesight therefore and you start to lose the Monet that we all love.

Certainly, from our list of great disabled artists it would seem that disability hasn’t been an overwhelming force. Different artists have found simple adaptations enough to continue their work, such as Renoir’s simple strapping of the brush to his hand. In fact, in many cases, the clues of artists’ disabilities are very thin on the ground.

Art is always difficult to pin down. Where does it come from and what does it mean? It does appear that it isn’t so much about the eyes and the fingers but more about the mind and imagination.

The bold colours of van Gogh’s palette might be attributed to matching his unstable emotions, although there may also be other reasons. Lots of artists lick their brushes and the lead in van Gogh’s paint may have started to poison him causing swelling retinas. This might be why he paints such vivid halos around stars and lights (as he would have seen them) It’s also interesting to know that Dr Gachet (whom Vincent painted) might have treated his temporal lobe epilepsy with digitalis which can make colours appear yellow to the eye, explaining again, his near obsession with the colour.

Vincent certainly had some form of mental illness that led him to cut off part of his left ear and fatally shoot himself at the age of just 37. Although he was only painting for 10 years, he was prolific, completing over 2,000 works.

Blake claimed to have seen visions of biblical significance from an early age and this later informed his watercolours (and writings) of religious and romantic scenes. His hallucinations during clear consciousness point to a diagnosis of schizophrenia. 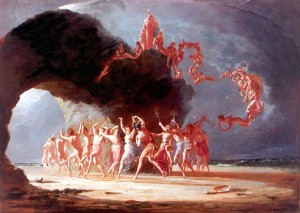 Lots of Dadd’s best work was completed in mental asylums where he developed a style of painting finely detailed scenes of fairies. Dadd had visited Egypt and became delusional leading to a diagnosis of simple sunstroke. Unfortunately, his personality had changed for good. Suspecting his father of being the Devil in disguise, he murdered him with a knife before being apprehended and committed to the Bethlem Hospital before being moved to the newly opened Broadmoor Hospital.

It is likely that Dadd was a paranoid schizophrenic, something to which he may have been genetically predisposed since two of his siblings were also diagnosed with the same illness. 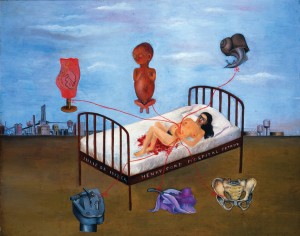 Frida contracted polio at the age of six causing her right leg to remain thinner than her left. In later life she’d disguise this with her long colourful skirts. Some historians have suggested that she may have had a form of spina bifida. Even so, she is known to have taken up boxing as a young girl.

Not only did Kahlo become involved in a traffic accident as a teenager she also received serious multiple injuries when on a bus that collided with a trolley car. The injuries included broken spine, collarbone, ribs and pelvis as well as a shattered right leg, dislocated right foot and shoulder. She also had her stomach pierced by an iron handrail.

It was miraculous that she survived to tell the tale although she spent time in a full body cast before, incredibly, learning to walk again. She often had relapses of extreme pain and was forced to rest in bed for long periods at a time but is chiefly remembered for her vivid self portraits that draw admirers, particularly in feminist circles, for their honest depiction of the challenges of female life. 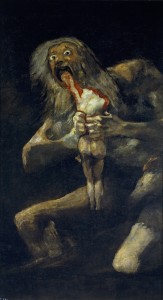 Early works include gorgeous, delicate portraits and nudes before later works begin to tackle darker subjects such as ‘asylum inmates’ and the like. Goya’s mental breakdown and deteriorating hearing appear to have informed the misery of his later work. His symptoms may have been caused by viral encephalitis or possibly a series of minor strokes. 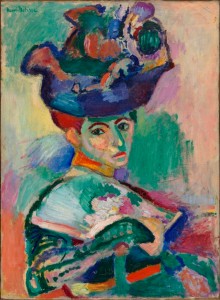 Matisse became a wheelchair user shortly after surgery for cancer. He survived for 20 years and developed a method of cutting out shapes from coloured paper and having people stick them on large wall mounted sheets of paper for him. He also used chalks on the end of long sticks so that he could sketch patterns from his seated position before cutting out the necessary paper pieces. Henri Matisse is renowned as a true master of colour and design.

Manet became seriously disabled at the end of his life. His painful partial paralysis came about probably as the result of untreated syphilis that must also have been uncomfortable. He contracted gangrene and had his left foot amputated, dying 11 days later.

In later life Renior developed rheumatoid arthritis and moved to the Mediterranean coast to find some relief. Although the condition severely curtailed his movement he continued to paint. By this time he’d become a wheelchair user and had deformed hands.

The condition of his hands did mean a slight change to his painting style (the brush being strapped to his hand) but this doesn’t appear to have made a significant difference to the quality of his work. 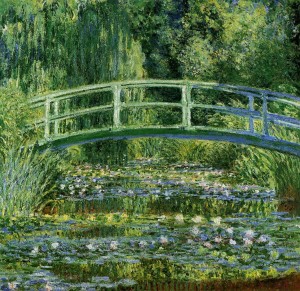 Monet’s cataracts blurred his vision and probably contributed to making the artist use darker colours than he would have had he been able to see clearly. It is obvious that his use of yellow and pink is exaggerated. It is also thought that he attempted to compensate his palette through memory leaving us with a collection of idiosyncratically coloured works.

As his eyesight deteriorated he ended up having to label his tubes of paints. He underwent surgery and on recovery destroyed many of the more inaccurate works

Seven to sample at Unlimited festival

Find your own superhero with Touretteshero at Scarborough Art Gallery

Getting into the arts