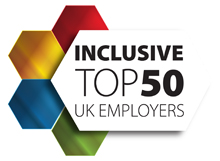 Sometimes there are words that are mocked for being ‘PC’. But when we examine what life is like without diversity and inclusion, it gives us a clue as to why this is so important.

There is no aspect of British cultural, business, medical and social life that would be of any value, were it not for the inclusion of the broadest possible spectrum of our population; and within that inclusivity a diversity of ethnicity, gender, age, sexual orientation, disabilities and all kinds of other elements.

So, forget those who sneer and mock about these being ‘key buzz words’; To this day we can see all around us examples where there’s still work hugely needed to include and embrace everyone.

On April 21st, the Co-op will host the first ever Northern Inclusive Top 50 UK Employers Launch, celebrating and showcasing organisations that are going above and beyond their corporate social responsibility to capture the diverse talents of the United Kingdom, and becoming more competitive as a result.

A variety of industries across the Northern Powerhouse are set to take a fresh look at how inclusion is viewed and open a broader conversation surrounding the diversity agenda. An elite pick and mix of diversity ambassadors will collaborate in Manchester amongst a lineup of dynamic keynote speakers.

CEO of The Inclusive Top 50, Paul Sesay has over 15 years worth of experience in the EDI sector and has a whole catalogue of diversity initiatives behind him including the groundbreaking National Diversity Awards.

“We are thrilled to be holding the Northern Inclusive Top 50 UK Employers Launch in partnership with the Co-op. This event will serve as an opportunity to showcase employers who are showing a strong commitment to diversity, and also look at what we can continue to do moving forward”.

“Diversity and Inclusion has always formed part of our foundation. This type of index helps us to challenge ourselves to do better but also celebrate the success of other”.

With over 100 submissions last year, the definitive List of the Top 50 Most Inclusive Organisations was published ranking Mental Health and Wellbeing charity Touchstone as number 1. Touchstone CEO Alison Lowe will take centre stage at the Launch to highlight their position.

“Touchstone were surprised and delighted to be named number 1 on The Inclusive Top 50 UK Employers List, beating the likes of Sky, Ministry of Justice and British Airways. Our involvement with The Inclusive Top 50 and The Excellence in Diversity Awards has been nothing but a positive one, and has shown us that our practice is also excellent”.

Ahead of the election on 4 May, Tabitha Morton, Women’s Equality Party Candidate for Liverpool Metro Mayor will also participate to highlight gender equality issues such as domestic violence and the pay gap. Morton is running against four male representatives of the Conservative, Lib Dem, Labour and Green parties, as well as one female UKIP candidate.

“I’m delighted to be included in this year’s launch” Said Tabitha. “I’m standing to be Liverpool Metro Mayor because I believe that as we take decisions that will shape our future for generations to come; we cannot afford to miss out on the energy and ideas of half the population, including BME women, disabled women, LGBT+ women and all those whose voices are not heard.”

Warrington Disability Partnership CEO, Dave Thompson MBE, will also share his journey at the event. Acquiring his disability at the age of 31 when a sports accident left him paralysed, Dave set about developing a data base of information for disabled people. The partnership he established has negotiated a myriad of contracts with public and private sector concerns, all of which have resulted in not just a successful business, but services of very high quality for disabled people.

Employing over 50 staff and nearly 200 volunteers, Dave is also the founder of the world’s largest voluntary pan disability independent living event and has presented a variety of Disability Equality training courses that have been attended by over 36,000 people.

The event will not only commemorate companies who featured on the 2016 list, but will mark a significant occasion to welcome latest members and Launch the initiative ahead of this year’s grand revealing at the Excellence in Diversity Awards ceremony.