Bristol’s very own SS Great Britain is one of the most accessible historic ships in the world. Coming aboard this ancient lady of the seas, visitors of all abilities are guaranteed an extraordinary adventure into the past.

The SS Great Britain towered above us, resplendent in her gold ornamentation. It was immensely moving, being in the presence of such magnificence. Thoughtfully and imaginatively restored, from dry dock, to dockyard museum and right throughout the ship, virtually everywhere was wheelchair accessible, including the remarkable space enabling people to wander around the preserved hull.

Away from the ship, we headed over to the museum. A series of long steep, but achievable ramps, took us back in time through the SS Great Britain’s remarkable history. Travelling through four different time zones, we discovered powerful stories and spectacular objects from the ship’s long and adventure-filled life.

The interactive exhibits added tremendous excitement for my Goddaughters and I as determinedly, we took part in every single one.  We were even able to test our strength by ‘lifting’ the giant propeller, only to find that the five-year-old among us was the strongest.

Posing for a portrait in the photographic studio was hilarious.  Donning giant bonnets and heavy, swishy crinoline dresses, we squealed so loudly, gaining quite an audience. This re-enactment space gave the girls a real sense of what it felt like to wear clothes in bygone times, not to mention an appreciation for the lightweight clothing they get to wear in our current century.

Having fully experienced all there was to learn about the history, it was time to board the ‘queen of ships’ herself. Stepping out of the museum door, we experienced what might be described as an enchanting wardrobe into Narnia moment, as we found ourselves on deck, under a flag strewn sky, surrounded by costumed performers. A wonderful hour was spent up on deck, looking for pirates and doing a spot of swabbing.

Eventually, taking the lift down to the next level, we headed for the opulent end of the ship.  Excitedly wandering through ultra-swish cabins, we took a moment to sit at a stunningly food-laden dining table and played at being posh. You certainly get a feel for first class luxury here. My oldest Goddaughter however, was not amused since she was being rudely ignored by a rather snooty lady. When the penny finally dropped that she’d actually been talking to a wax model, this made her giggle for the rest of the day.

Deep inside the dark engine room, enormous machinery chugged and turned. Billows of steam rose high and suddenly the live tall-hatted figure of Isambard Kingdom Brunel, came into view. In a wonderfully theatrical performance, he regaled us with the workings of his great ship and patiently answered questions until even the most inquisitive child ran dry.

Around every corner of this ship, there were wonders to feast upon. In the galley, delicious baking smells hit our senses and a frantic cook assailed our ears as he shouted at the ship’s cat. With lids rattling on kitchen pots and even the shadows of rats scuttling about inside the cupboards, this area kept us spellbound.

Opening the door to steerage, the atmosphere dramatically changed. Where before we could dance through the hallways, now we had to squeeze. Often at historic attractions, alternative routes are made for wheelchairs but not here, where everyone else was allowed to tread, I could I roll there too. This included the negotiation of a shifting floor. It was remarkable to actually feel the movement of the creaking deck as I rolled amongst cramped bunk spaces and through poky eating areas. In these dowdy conditions you really get a sense of what the tradesmen, labourers and less affluent passengers would have had to endure.

Virtually everywhere is wheelchair accessible, including the remarkable space enabling people to wander around the preserved hull.

On the third deck down we were directed to the promenade saloon.  A lavish wide open space where first class passengers would have walked, talked, danced, flirted and socialised to their hearts content. I was especially enamoured with the disabled toilet.  Well, it did have Sir Thomas Crapper’s stamp on it. Accessible bathrooms wouldn’t have existed 100 years ago, but it was brilliant to have actual ‘public’ toilets on the ship and to see the care put into the creation of an accessible one.

In contrast to the classy playground of the promenade saloon, the cargo deck was a stark and empty void. This area, would have had five levels for crew accommodation and storage.  Often described as an iron cathedral, its echoing emptiness sent my imagination into overdrive as I imagined the noises and smells of people and animals all crammed into this space on long haul crossings to Australia.

Some say that ghosts still roam this part of the ship; my Goddaughters thought this was amazing and wanted to meet them. I am willing to have a go at most activities but I draw the line at ghost stalking!

We’d already spent four hours on the ship that morning and still there was more to see. Reluctantly, we bade farewell to our grand host, promising faithfully to return to her distinguished company again soon.

Often at historic attractions, alternative routes are made for wheelchairs but not here, where everyone else was allowed to tread, I could I roll there too.

The interior of the SS Great Britain has been sympathetically reconstructed and is wonderfully accessible for wheelchair users.

Entry is free for assistants or carers and tickets last for a year, so it is really good value for money.

The ship represents a dramatic part of Bristol’s history and is used, with an ingenious blend of fun, and fantastic storytelling, to unravel it in a way that is guaranteed to appeal to all ages. 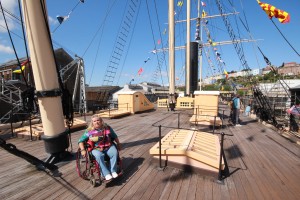 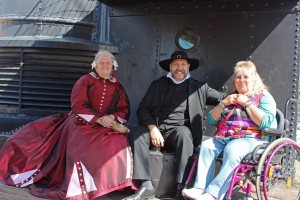