Xercise4Less is an awardwinning, nationwide budget gym operator. Xercise4Less prides itself on offering affordable ﬁtness to everyone, helping to change lives by enabling people to exercise and live a healthy lifestyle in a judgement free environment. 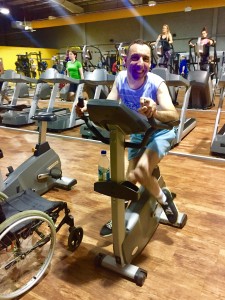 Xercise4Less was founded by ex-rugby player, Jon Wright, when his initial attempt to start a health club stalled during the credit crunch. It now employs more than 700 people and has more than 325,000 members across the UK.

Currently boasting 47 branches nationwide, the popularity of its low cost memberships, which start at £9.99 a month, means the gym chain plans to expand to 60 gyms in the UK by the end of 2017 with the of aim attracting over 500,000 new members.

Jim Gilmour is a member of Xercise4Less in Renfrew, Scotland. Jim has cerebral palsy but has found that exercise helps combat the effects of his condition.

In August, Jim will be taking part in a charity fundraiser at his gym in Renfrew to raise money for others living with cerebral palsy. He’ll attempt to cycle 42km in one day, which will be a massive feat for him and no doubt an inspiration to those with the same condition. Jim said: “I wanted to do this cycle to help raise money for people like me. I have my own tricycle that I pay for myself but bikes can be over £1,000 and some people may not have the money to do that. I like to go out on my bike or come to Xercise4Less. Doing this cycle might help others to see that they can do it too.”

General Manager of Xercise4Less Renfrew, Kelly McNeillie, told us that: ‘’James is an absolute inspiration to everyone here at Xercise4Less Renfrew. It was no surprise when James told me that he wanted to do the cycle for charity as he is always dedicating his time to helping others through volunteering. We found that by contacting Cerebral Palsy Scotland, that Jim could raise some much needed funding for the Bobath Centre in Glasgow, for children with cerebral palsy and James was delighted to know that his fundraising efforts would be helping others with Cerebral Palsy.’’

Members of staff at Xercise4Less will also pitch in on the day by holding a bootcamp in the car park, with all proceeds going to charity. Members of the gym are encouraged to donate a minimum of £2 to take part and do their bit for Jim’s very worthy cause.

Census 2021 is up and running across England and Wales