Wheelchair sport whizz-kid Lily Rice is getting ready to take on the world.

The 14-year-old from Manorbier, on the south coast of Pembrokeshire, Wales, hit the headlines last autumn when she became the first female in Europe to achieve a back flip in the growing sport of WCMX – wheelchair motocross. 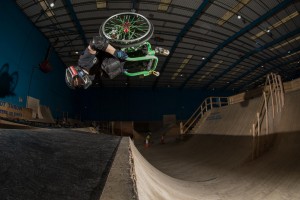 And she is now to showcase her skills in the USA as the first-ever, and only GB representative at the World WCMX Championships in California.

Lily, her mum and dad Jenni and Mark and her 11-year-old sister, Amber, will be flying out on Easter Monday ahead of the event on April 6 and 7.

And she said this week: “I’m really excited – I just can’t believe it’s actually happening.”
Year 9 Greenhill School pupil Lily has had a busy six months since her back flip stunt took social media by storm.

In between training at Haverfordwest skatepark and indoor venues across the UK, she’s starred in the Christmas music video of former McFly singer Tom Fletcher and has been mentoring disability groups and giving motivational talks to schools on behalf of the Princes Gate Trust.

“It was quite scary at first, but I’ve got used to it,” said Lily. “What has been so good is that I’ve had messages from people all over the world wanting to get into WCMX. I’m hoping to meet some of them in California, as well as Aaron Fotheringham, the current WCMX world champion who donated his chair to me last year.” 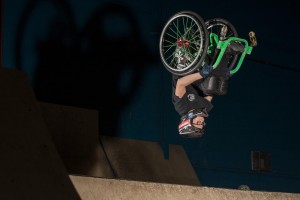 She is now working with a well-known wheelchair manufacturer to create a chair to help others take part in WCMX. Lily and her family would like to thank everyone who has supported her on her journey to the world championships, from where she is hoping to live stream on Facebook.