My Story: The De Assis Family 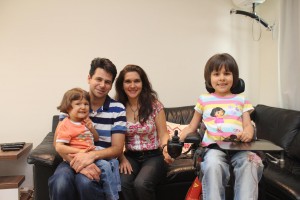 Until three months ago, the De Assis family lived in their own house in Borehamwood. It would have suited them perfectly if it wasn’t for the fact that both their children were born with the genetic disease, Spinal Muscular Atrophy (SMA), which causes severe muscle weakness and loss of movement.

Adi and Rosicleia moved from Brazil to the UK in 1997. They settled into jobs and life in this country and bought a house. Hamane was born in 2007 but before long they realised she wasn’t developing as she should. She was diagnosed with SMA when she was two and life quickly changed for the family. Hamane would never be able to walk but their house was too small for a wheelchair. They looked at buying a bigger house but simply couldn’t afford one on Adi’s salary as an electrical engineer, especially since Rosicleia had stopped working to look after Hamane.

Rosicleia explains: “We had always wanted two children. When we talked to Hamane’s doctors they told us that the odds against us having another child with the disease, were in our favour.

When Shaya came along in 2010 she started crawling and progressed to walking with a baby walker but by the time she was two she had not walked unaided. Shaya had SMA as well, although in a slightly milder form than Hamane.”

With two children that needed wheelchairs it was now obvious to them that they couldn’t stay in their house. “It was a nightmare getting the children in and out of the house, from room to room and upstairs. The children had no independence and we had no time to ourselves.” They approached Hertsmere Borough Council, who agreed to try to find them a suitable home.

Hightown Praetorian & Churches Housing Association got involved with the family as they were building 85 new affordable homes at the time in Borehamwood. They were already adapting one house for disabled occupants but the Council asked if they could adapt another for the De Assis family. Hightown agreed and worked closely with the family to ensure their new house met their needs.

All doors and corridors in the house are wider for the girls’ wheelchairs. Hoists run through the house and link both girls’ bedrooms to the bathroom, which is a wet room with an automatic bench for bathing the children. A lift that Hamane loves to use, connects downstairs with upstairs and they have a disabled parking space. The adaptations were paid for by the local authority with a Disabled Facilities Grant for which they had to sell their house to be eligible. Finally they were handed the keys to their new home in July 2013.

Adi said: “We’ve been in the house a couple of months now and it is great. Although the house looks big to most people, for us it’s just the right size, as the girls have room to turn their wheelchairs. Having this house gives the girls some independence as they can go upstairs on their own and play. It also gives us some much needed peace and quiet, a bit of comfort and some privacy.”

It’s so much better having the space, and being in this house gives us an easier life. The last six years have been emotionally draining. There seemed to be no light at the end of the tunnel but now we feel that we can relax. This is now a new chapter in our lives and we are very relieved and thankful that the Council and Hightown were able to give us the help we needed.”

Why we love Naidex

National charity Remap gets to work solving challenges from kids

Naidex: More Than A Show, proudly supported by Able Magazine

M-Enabling Forum supported by Able Magazine: “The best technologies cannot be useful if our digital environment is not accessible”