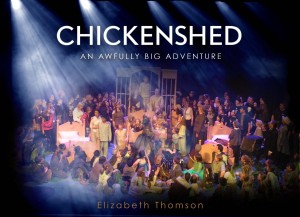 A selection of book reviews from Able Magazine #109 (January/February) by Tom Jamison.

Chickenshed has become a byword for inclusion, inviting people of all ages and all backgrounds and abilities to perform through dance, acting, music and song. This glorious book tells the tale of this cherished theatre company through the voices of some of the hundreds of performers that have been part of it through the years.

The sumptuous photographs chart the extraordinary development of a simple idea into a theatre company that continues to inspire people. This is a touching and heartening tome.

By any measure, David Weir is a superb athlete. His four gold medals at London 2012 have rightfully earned him a place in British sporting history. It’s a good time then to examine how he got there, both from the perspective of an athlete and from that of a disabled person growing up on a London council estate. This is no sob-story but one where Weir’s courage and determination literally win through. He’s had to learn to fight like a lion, even at times, in spite of the advice and instruction from the top figures in UK Athletics. Weir’s story challenges us to be the best we can be.

I love the idea of ending bullying but even the title of this thin book is almost as confusing as the content. The idea to subvert the traditional notion of bullying by having the teachers in the story bully each other isn’t helped by the meandering build-up to an all but non-existent climax.

The fully revised guide is based around a very clear and easy to read map of the centre of London but concentrates on facilities such as parking bays and National Key Scheme toilets and the like. The symbols have been cleverly designed to incorporate details such as numbers of bays and time limits etc. There’s also a superb guide to parking provision at theatres, sports venues and hospitals.

A traditional road atlas with the added bonus of a full rundown of disability friendly facilities such as parking bays and suitable public conveniences. Every major city in the UK is also profiled and carefully mapped to give a more in-depth appreciation of the local provision. This is a glove-box must.