This summer for The Big Lunch 2018, people all over Northern Ireland are coming out of their houses and into the streets, gardens back alleys and parks, for their neighbourhood Big Lunch. In one East Belfast street, Mark Patty is bringing back community spirit with the first street party since the 1980s.

Mark took the initiative to hold a Big Lunch on the 16th of June on his Street in the Woodstock area of east Belfast and got to know his neighbours for the first time. Everyone got involved, from little kids to older people on the street, and people who have lived there for 47 years met people who just moved in two weeks ago. Everyone brought something to share, whether it was food, games, dancing, music or just good conversation. 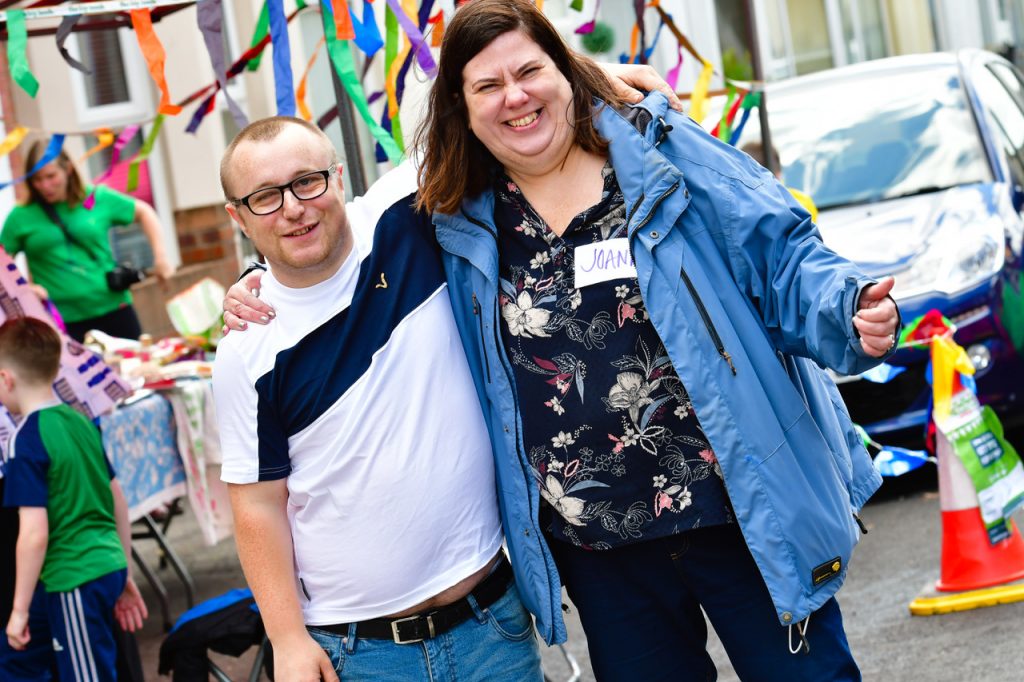 Mark and his neighbours are joining people in towns, villages, streets and rural areas across the UK who are stopping everything to make time to connect their community over a shared lunch. The Big Lunch is an idea from the Eden project, made possible by the National Lottery.

Mark said “I have really enjoyed organizing our street party and getting to know my neighbours after 5 years keeping myself to myself. My neighbours are really nice and I would like to do more street parties like this. I feel more confident of doing more events like this now, and I really can’t wait until the next one. To anyone thinking of doing a Big Lunch on their own street, I would say Go for it!” 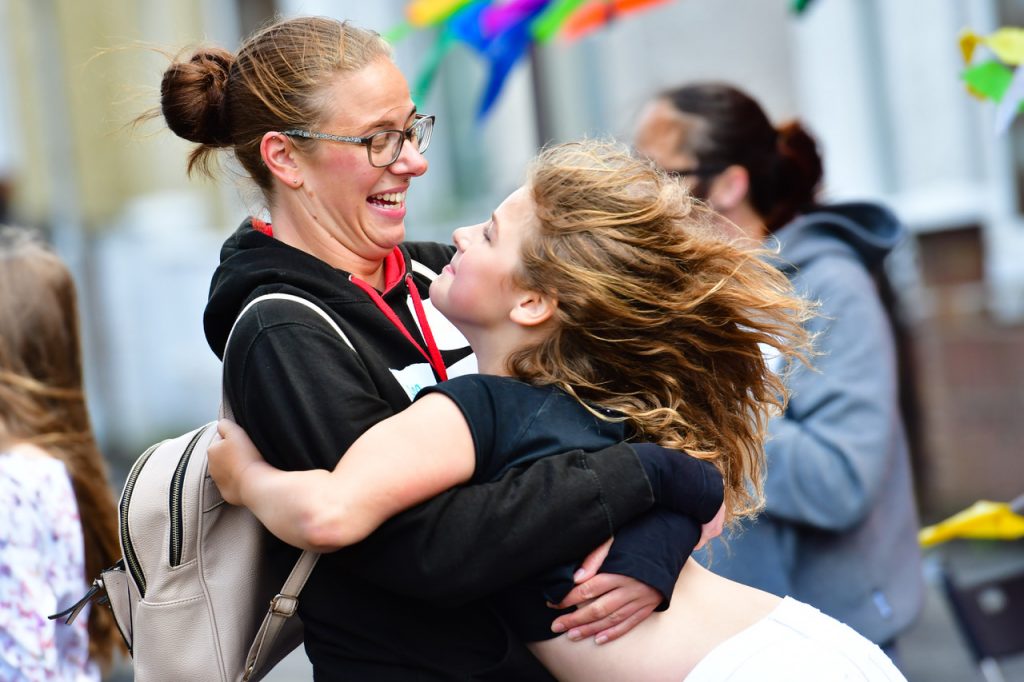 Mark is the DJ for Black Moon, which is a monthly disco for people with a learning disability, held in the Black Box in Belfast. DJ Twister brought the beats to the street for his Big Lunch. Mark has a learning disability himself, but has never let that hold him back from achieving his community ambitions. A Big Lunch organizer from a neighbouring street, Joanne Boal came and helped mark to deliver the invitations and lent him tables. Another Big Luncher from Groomsport, Sharon Cove, gave Mark some spare bunting to bring some colour to his event.

Mark said “It feels amazing to have that support behind you to doing a street party big lunch – helping others and having others willing to help you out when it’s your street’s turn.”

Mark’s neighbours said there used to be a street party on his street every year, up until around the late 80’s and then they just stopped happening as people got busier and more disconnected. Some of the neighbours remember taking over the whole street as kids, a time when everyone knew everyone else. Community spirit had fallen away since those days, but Mark Patty has brought it back, and brought a smile to many faces on his Woodstock Street. 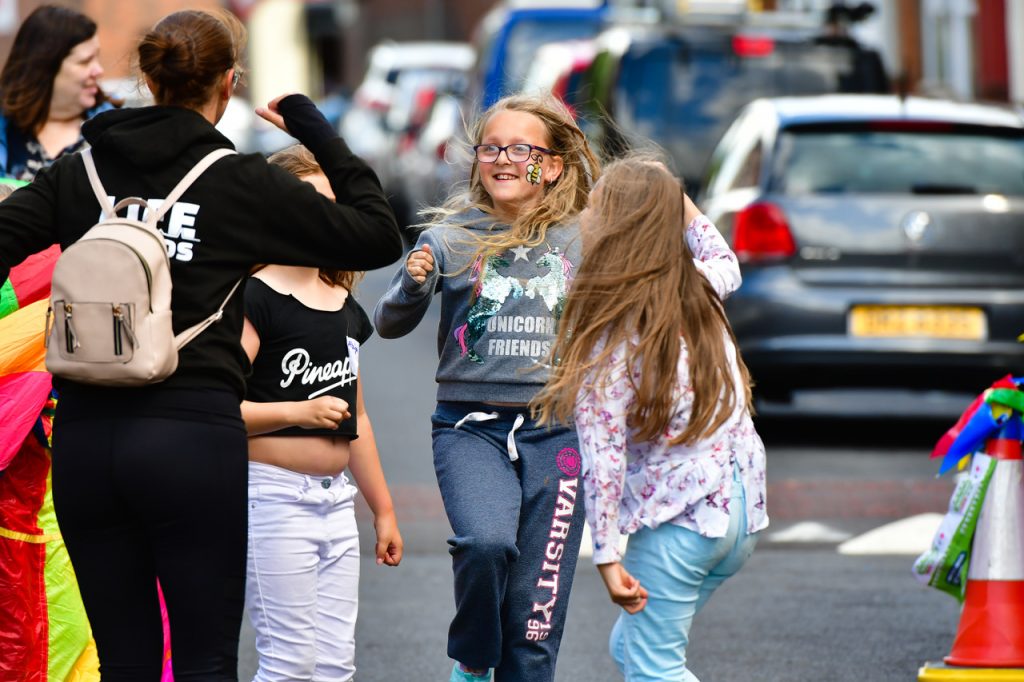 Mark enjoyed the Big Lunch so much he now wants to organize a full family fun day for his neighbours later on in the summer. Mark is also starting an alleyway transformation project and got a few neighbours on board with that at the Big Lunch on Sunday. This year has seen Big Lunches of all sizes in every county of Northern Ireland and all over the UK. If you haven’t gotten involved yet, you could still join the 560 communities across Northern Ireland joining The Big Lunch 2018 at any time over the summer.

Grainne McCloskey from the Big Lunch Northern Ireland said: “In 2015 we were delighted to have Mark attend the Eden Project Community Camp for people who want to take community spirit to the next level in their area and Mark has certainly done that! The community camp is for anyone interested in taking the initiative in their community who could benefit from a network of supportive, positive, creative people. We are so proud of Mark challenging himself this year and creating this beautiful day for his neighbours.

“The Big Lunch creates connected communities where residents look out for each other. All it takes is for someone in the community to take the initiative to get the ball rolling. Just set a date and invite some neighbours to bring a chair and something to share. It can be that simple, but the impact can be profound, especially on those who might be suffering from loneliness. Make it your own and as unique as your community.

“Many people choose to hold their Big Lunches later in the summer if it suits their community better. And it doesn’t have to be big. We find that the smaller events often have the biggest impact because people really get a chance to get to know each other. If you’re still undecided we would invite you to pick a date over the summer, and just do it! Just register at www.thebiglunch.com for a free starter pack.”

A new study commissioned by Eden Project Communities for The Big Lunch has shown that only 54% of people in Northern Ireland feel they belong to their own neighbourhood.

The Research conducted by The Eden Project found that 76 per cent of people who joined a Big Lunch felt closer to their neighbours as a result, with 79 per cent socialising more with people in their community.

Over the past nine years, Big Lunches of all sizes have happened in streets, gardens, parks and local
community venues. Thousands have taken place each year, with 9.3 million people taking part in 2017 in more than 96,000 events.

Post-event research in 2017 highlighted many benefits, which speak for themselves…

And 58 per cent believed it brought people from different ethnic backgrounds together. The Big Lunch – www. thebiglunch.com – is the UK’s annual get-together for neighbours.

Summing up at Derwen College for Maths Week 2019

Gearing up for Mack’s Challenge at Derwen College