The Energy Within starring Champion Paralympian Stefanie Reid is here!

The Energy Within is an inspiring short film about a para-athlete who finds the courage to follow her seemingly impossible dream. Set on the red tarmac of Mile End Stadium’s running tracks, ‘The Energy Within’ tells the story of Julie, a 30-year old woman who dreams of being a pro-athlete. The film starts two years after Julie lost her leg in an accident, and with it her chances at an athletic career. But now that Julie is getting used to her prosthetic, her dream seems possible once more. 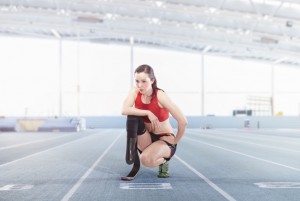 Writer and Director Samuel de Ceccatty explains his drive to create the film, “Having a close family member with MS, I’ve been fervently following the incredible progress in technology such as Biomechatronics, and it’s very exciting that today people with mobility issues are no longer held back, since science allows them to rival – and maybe even outdo – people without ‘disabilities’. Yet what makes this shift possible in the first place is individual willpower: that moment when your inner strength is ignited, making it possible to overcome any challenges. And that’s the feeling I wanted to bring to screen with my short film The Energy Within.

I shoot on wide lenses for a decidedly cinematic feel, using tripod and track shots with low contrasts, but warm saturated colours. Ahead of filming itself, I storyboard every shot of the film and rehearse with actors thoroughly. I’m also worked with composer Ollie Howell on an original soundtrack that helped elevate the overall project, translating the depth and importance of this personal story.

Ultimately, I want to tell an inspiring and humane story that captures a hugely important shift in our understanding of disabilities, through the truthful and intimate story of a woman’s journey to finding the strength to follow her dreams.”

In order to capture the most powerful and authentic performance possible, Samuel was keen to cast a lead actress with a deep knowledge and personal connection to the issues at hand. To that effect, he contacted Stefanie Reid, a track and field Paralympian who competes for Great Britain, notably in T44 sprint events. Stefanie has won numerous medals and awards in her athletic career, including silver medals at the Paralympic World Cup and Paralympic Games. She is also an active campaigner for disabled models, featuring in British Vogue magazine and British high-street store Debenhams’ latest campaign.

Samuel de Ceccatty – Writer / Director
Samuel de Ceccatty came from a background in graphic design before turning decidedly towards directing. His work explores the themes of isolation and imagination in a style that turns everyday life into epic adventures. Manon and Samuel set up their production company in 2011, after their first music video together was screened at Rushes Soho Shorts. Since then, Samuel’s work has screened at international festivals such as the London SFF, Seattle IFF, Cambridge FF and Euroshorts, as well as winning several competitions for established institutions, notably the BFI, the National Theatre, and most recently the BBC’s Writers Room. Samuel is attached to direct the feature Madly (f.k.a Treading Water), which was finalist in film London’s Microwave scheme with mentors Lynne Ramsay and John Yorke. Samuel’s latest short film Safiyah Flies Across the Ocean won funding from Ideastap and was screened as part of Underwire FF where it was nominated for an award.

Producer – Manon L. Ardisson
Manon Ardisson is an independent producer based in London. Her latest feature film, God’s Own Country, premiered at the Sundance Film Festival in January 2017, winning the Special Jury Award for Best Directing in the World Dramatic competition. The film stars new talents Josh O’Connor and Alec Secareanu alongside Gemma Jones and Ian Hart, and it was financed by the BFI and Creative England. Manon also co-produced the Venezuelan feature La Soledad, written and directed by Jorge Thielen Armand. The film was developed and financed by the Venice Biennale Cinema College, and premiered at the Venice Film Festival in September 2016. It recently won the Audience Award at the Miami Film Festival and was selected for Carthagena, Nashville, Atlanta and Sarasota film festivals among others. Manon comes from a production background, and also worked as Creative Assistant at Paul Webster’s Shoebox Films before setting up her own company Magic Bear Productions.

Producer – Paul Jibson
Paul is originally from Hull, East Yorkshire and has a burning passion for filmmaking with emotional realism as the bedrock. After training and working as an actor for nearly two decades in the film and television industry, the move to producing was a natural progression. He has written, directed and produced narrative shorts, documentaries, animations and many more under the guise of Southern Monkey Productions and more recently Active Studios. His work has screened and won awards at prestigious festivals around the world he has has a proud history of working with and for international clients including the Cabinet Office, ThoughtWorks and Virgin Atlantic. His aim is to produce original content to educate, inform and inspire.

Adam Suschitzky – Director of Photography
“I have been shooting features, television drama & commercials for the past twenty years.
It’s all about story telling for me. The script, the director, the actors, the production design all guide and inspire the choices we make on set. Then it’s about how to make the most out of the time and resources we have to maximise the productivity of our day. I come from a long line of
cinematographer/photographers. Both my father and grandfather before me made many movies and always carried a stills camera wherever they went. This is a family tradition I am pleased to have kept alive in my own right.”

Ollie Howell is a multi-award winning drummer, instrumentalist, composer, producer and broadcaster. Ollie is the first ever jazz recipient of a Sky Academy Arts Scholarship. His first album Sutures and Stitches received critical acclaim, with the Guardian hailing it as ‘a fine debut’ and Mojo stating that his music ‘has delicious dynamic flow and an almost elegiac beauty’. He is now finalising his upcoming second album Self Identity and has filmed a program for the Sky Arts channel around the making of the album, presented by Melvyn Bragg. Ollie is a multi-faceted and talented artist, easily writing music for films, TV, and commercials, producing pop artists as well as working as a presenter on Jazz London Radio and Jazz FM.

Editor – Julie Buckland
Julie has been editing for film and television for more than 20 years, working alongside legends of the screen such as John Schlesinger and Jack Clayton. Since the beginning of her career at the BBC, she has continued to gather the skills that have enabled her to forge a successful path as a Documentary Editor, gaining nominations in both the BAFTA and Grierson Awards. Her passion for dance fuels her creative eye and continually spills into her editing, even more so now with her recent return to drama with the notable shorts Safiyah Flies Across The Ocean, Nightstand and, currently, the feature film Waking David.