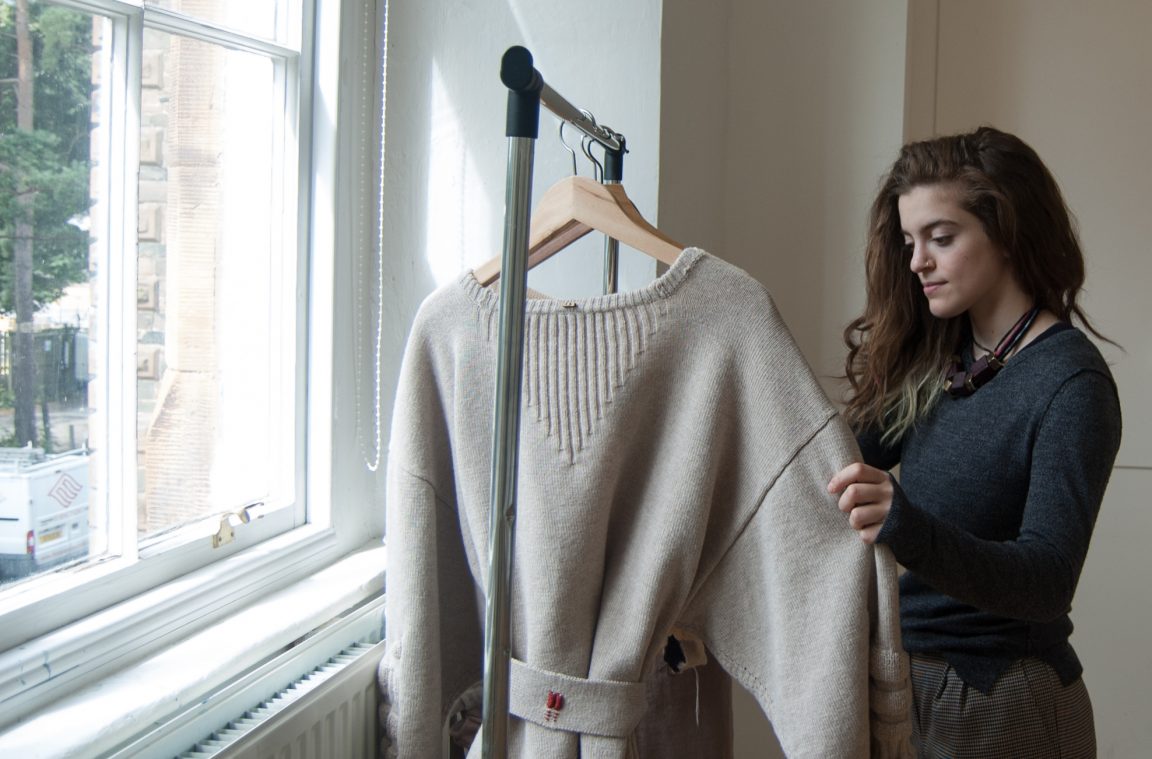 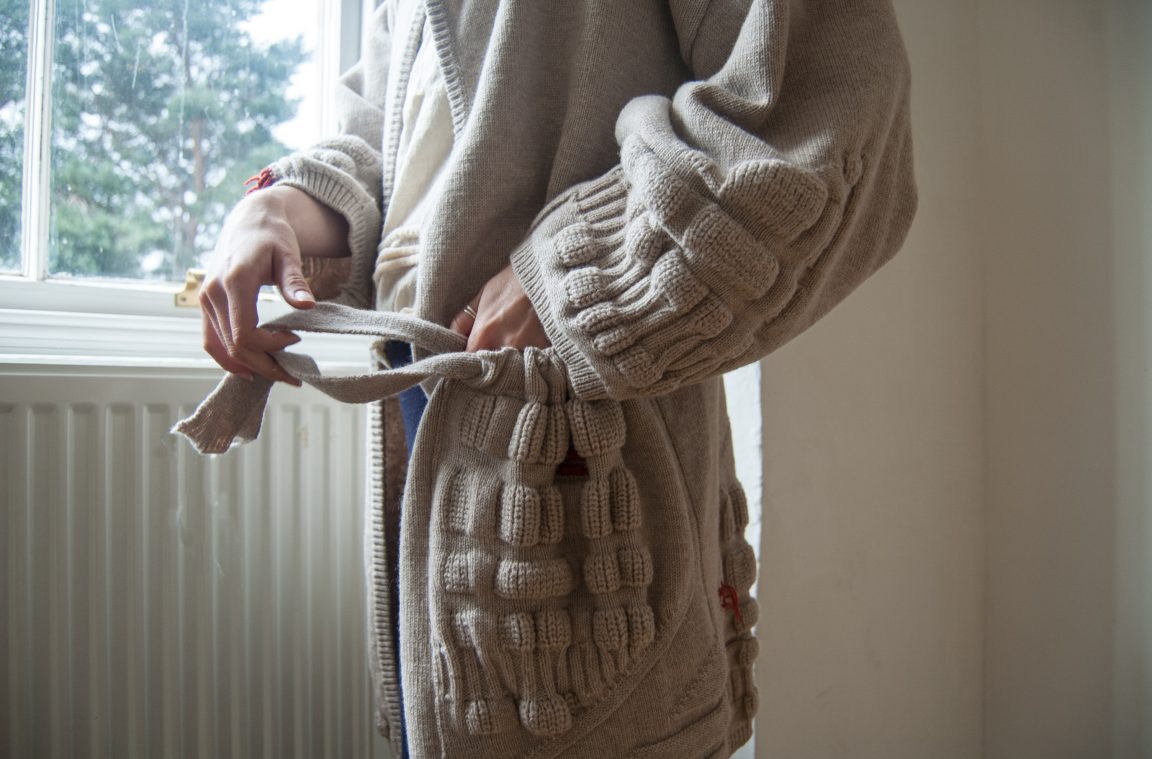 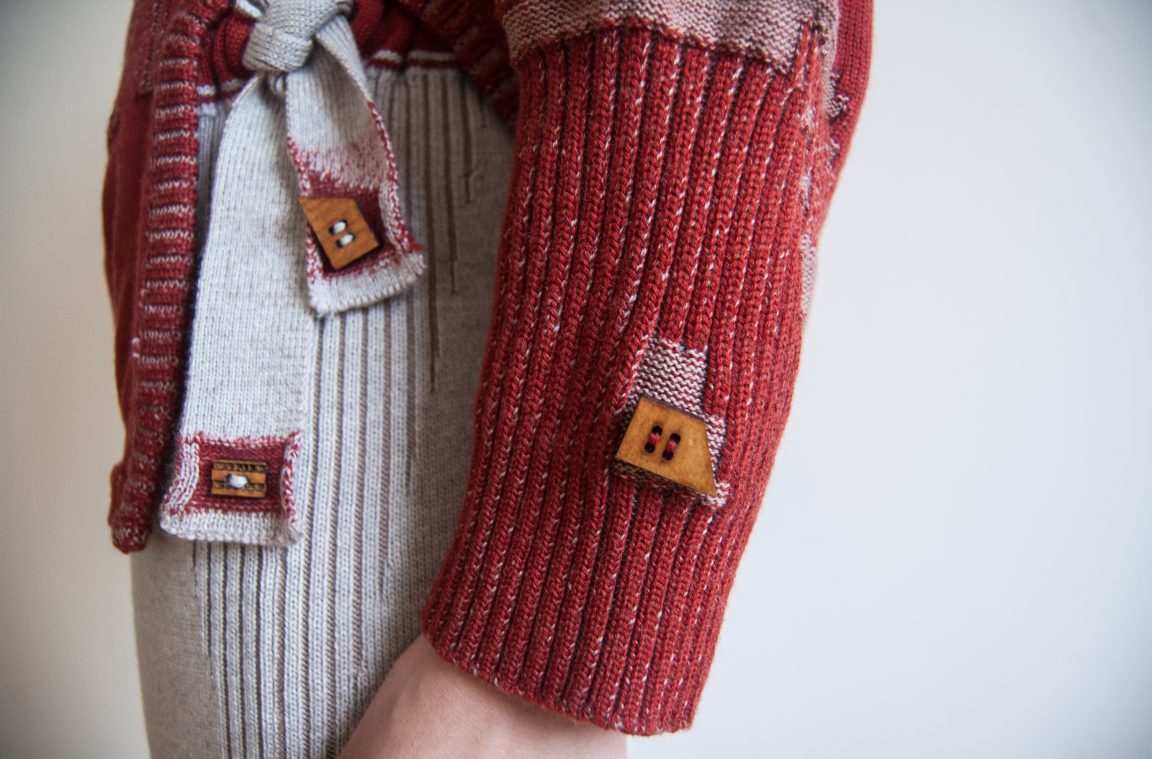 A Heriot-Watt student has designed a tactile tartan with the aim of assisting people with visual impairments.

Anna Cuinu, who studies at the university’s Textile and Design School in Galashiels, investigated how blind, colour blind or partially sighted people experience fabrics, with particular reference to tartan.

As part of her Masters Knitwear course, the student held focus groups with the Royal National Institute for the Blind (RNIB), analysing current consumer trends to solve the problems those living with visual impairments often have with clothes.

Anna decided to design a knitted tartan fabric using stitch structures to translate colours and patterns from the traditional tartan fabric into a sensory one.

A colour coding system called Feelipa, was also used to communicate the colour of the garments and applied in the form of wooden buttons.

Other features included, large drawstring pockets and tie fastenings instead of zips and buttons.

Over two million people in the UK live with sight loss – and Anna now hopes her designs influence the fashion industry.

Speaking about her collection, Anna said: “It’s been an astonishing project into accessibility issues with clothing, not only for those with visual impairments but for many others.

“The RNIB have been fantastic in supporting and facilitating the research, including a focus group and loaning teaching tools. My time volunteering has also been excellent, allowing me for a deeper understanding of the difficulties that those with visual impairments can face due to poor design.

“Accessible designs are often gimmicky or designed by larger companies to use as a marketing tool, where the innovative product is then not rolled out for use by those who would benefit from it.

“I’m excited to go forward with what I’ve learnt over the past year between knitwear manufacturing, materials testing methods and methodical approaches to research and design to create more accessible clothing solutions.”

Jane Coates, Community Facilitator East of Scotland, RNIB said: “Anna Cuinu approached us with a request to explore how clothing could be made more accessible to those living with a visual impairment by running a focus group with blind and partially sighted females.

“Anna firstly took the time to undergo RNIB volunteer recruitment training and learn about sighted guide, she then attended many classes to get a genuine feel for both the service users and peoples different abilities.

“Anna ran the workshop which was a tremendous success her approach was thought-provoking for all who attended and the feedback was of the highest.”

Anna’s lecturer Dr Lisa Macintyre added: “Anna’s project is the first we’ve had that addresses the issues of dressing with visual impairment.

“Her commitment to the project, understanding and engaging with the people that her project aims to serve has been outstanding.

“It is always important for designers to engage with their intended consumers and to really understand their needs but it was absolutely critical in a project like this one.”

James Adams, director of RNIB Scotland, the country’s leading sight loss charity, said: “It’s wonderful that the new generation of designers are thinking of people with disabilities. It’s their generosity of spirit, allied with their undoubted talent that will go far in creating the more inclusive society we all want.”

Opening Up A World Of Books

Shop from the RNIB