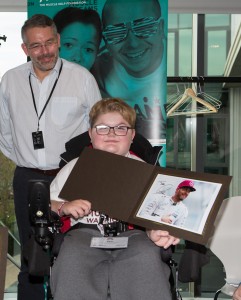 MERCEDES AMG PETRONAS Formula One Team HQ in Brackley, Northamptonshire, was the setting for a special event on Thursday 27th October for 10 lucky young VIP petrol-heads, aged between 12 and 22.

Throughout the past 18 months, MERCEDES AMG PETRONAS have committed to raising funds and delivering ‘Muscle Dreams’ for MHF and this exclusive event was the culmination of a very special partnership, when the top secret F1 factory was made available to the charity.

The day began with MHF’s volunteer hosting team and Mercedes’ own charity committee welcoming the boys, who had travelled from across the country, into the main reception area. Getting up close to and having their photos taken with Lewis Hamilton’s 2015 Championship winning racing car, and seeing the team’s many trophies, was a fantastic ice-breaker. The Auditorium provided an intimate and very exclusive setting for refreshments and lunch, including a fascinating talk by Mike Elliott, Head of Aerodynamics, illustrated with some spectacular images and films about the Mercedes family and the team behind their successes.

Some of MHF’s key donors and supporters were also invited to the event, to meet the boys and their families and witness at first-hand the work and impact of the charity.

After lunch, the 10 Muscle Dream beneficiaries departed for an exclusive tour personally hosted by members of the team’s Charity Committee to see the factory, which is not usually open to the public.

The event concluded with MHF’s #powerof657 BIG reveal moment that saw the key donors and supporters coming together as a group to collectively present a stunning photograph signed by Lewis Hamilton to each boy: the photographs were personalised by Lewis to each of MHF’s beneficiaries (see Ben Everett, 14, holding his photo left).

With photos taken of some 40 people delivering the charity’s signature ‘Muscle Warrior’ salute, together with MHF’s rallying tribal cry, everyone bid farewell to each other and the day ended with huge smiles, a few tears and some very special memories.

Kim Mander, mum of 12-year-old Muscle Dream beneficiary Jacob, who has SMA (Spinal Muscular Atrophy) type 2 said: “Thank you so much for allowing Jacob to be part of the amazing day at Mercedes. He has not stopped talking about it!! It has created some very special memories for him and we feel very honoured to have been part of your fabulous organisation”.

MHF’s CEO Michael McGrath, himself diagnosed with MD at the age of 18, said: “On behalf of the charity, I’d like to say an enormous thank you to everyone at MERCEDES AMG PETRONAS for making this such an extraordinary Muscle Dream experience for our boys. From the Mercedes team members who lifted and polished the huge glass display cabinets, to the factory tour hosts, the company’s charity committee, the caterers, the reception staff and the gatehouse and security team, we are extremely grateful for the commitment, effort and time given to ensure that the young people and their families had the best time ever. Their smiles said it all and the feedback received has been truly heart-warming. You are now all fully-fledged Muscle Warriors – welcome to our tribe!”

For more info or a comment from Michael McGrath, contact Lydia Drukarz at Wavelength PR on: 07977 454180 or email: lydia@wavelengthpr.com