A charity Wheelchair Basketball Tournament held at the Olympic Park has raised over £20,000 to support women in disability sport, with further funds expected to be raised over the next month.

The tournament took place at the iconic Copper Box Arena and was organised by leading disability charity Path to Success. More than 100 people attended the tournament, as ten corporate teams took to the court to battle for the title of ‘Corporate Wheelchair Basketball Champion’.

Teams were coached by prominent ex-Paralympians including Louise Sugden, Matt Sealy and Tyler Saunders, while Channel 4 reporter and Path to Success Patron Jordan Jarrett Bryan compered the event. Captain Helen Freeman and Siobhan Fitzpatrick, stars of the Women’s GB Team who recently won silver medals at the World Championships, were also in attendance.

Meg Hillier, MP for Hackney South and Shoreditch, was in attendance to speak with the athletes, Anita Choudhrie, and learn more about disability sport.

Funds raised by the tournament will support Path to Success’ ‘Path to Tokyo 2020’ campaign, which launched on International Women’s Day in 2018. The campaign offers financial support to women who aspire to represent Great Britain at the Paralympics across four major disability sports: Para-Badminton, Para Powerlifting, Wheelchair Tennis and Wheelchair Basketball. 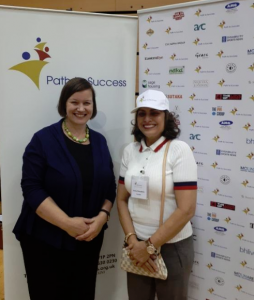 Some disability sports are still heavily underfunded in the UK forcing athletes to dip into their disability allowance or savings to pay for coaching, physiotherapy and tournament expenses.
Anita Choudhrie, Founder of Path to Success, said:

‘The Path to Success Wheelchair Basketball Tournament is a unique opportunity for able-bodied people to take part in an exhilarating and challenging sport, and to learn from athletes who have reached the pinnacle of their sport. The funds raised will make a huge difference for several female athletes being able to reach the Paralympics, while the exposure in the media is crucial in raising the profile of disability sport. We are so proud at how this event has grown over recent years, and I hope to see even more teams sign up next year.’ 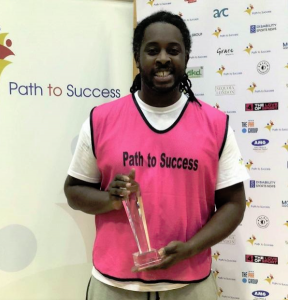 Path to Success Patron Jordan Jarrett-Bryan was presented with the Admiration Award. Every two years the Award is presented to an individual who has made a demonstrable charitable impact in their life through dedication, professionalism and integrity.

Corporate Sponsors of the Wheelchair Basketball Tournament include:

About Path to Tokyo

About Path to Success

Inspired by her Grandfather’s philanthropy and her own passion and experience for charity, founder Anita Choudhrie established Path to Success in London in 2005 with a focus on causes that support disability. Most recently Path to Success has supported the London Titans Wheelchair Basketball Club, which has produced over 50 Team Great Britain players, yet receive no central sports funding.

QEF residents take on 5km challenge event with a difference

Disabled sailing centre of excellence expands services thanks to £23,400 grant