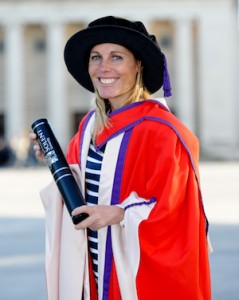 The Southampton sailor made history at London 2012, becoming the first ever female winner of the male dominated 2.4mR Paralympic class and Britain’s first ever Paralympic sailing gold medallist.

Later that same year, Helena achieved the unique feat of taking the Yngling Olympic Classes keelboat helm for a one-off at the 2006 Olympic test event and winning silver, for which she was shortlisted for 2006 ISAF World Sailor of the Year.

Her Paralympic Games debut came at Beijing 2008 where she finished seventh. IFDS Worlds bronze medals followed in 2009 and 2011.

Helena is continuing her voyage to Rio 2016 on a quest for her second gold medal. Outside of her Rio campaign she is looking to experiment with new classes and will be fronting her own SB20 campaign.

She was appointed Member of the Order of the British Empire  (MBE) in the 2013 New Year Honours for services to sailing.

Helena is a former student of Southampton Solent University and graduated from BEng (Hons) Yacht and Powercraft Design in 1996.

On receiving her honorary degree of Doctor of Sport, Helena said: “My experience here at Southampton Solent has helped me develop those qualities which are certainly needed to win a gold medal at the Games”.

She added: “Dream big and set yourself goals as stepping stones to try and achieve your dream. Dream for the stars and who knows you might achieve it. I did, but the moon is pretty good too.”

The university will be awarding honorary degrees to academics and professionals who have made an outstanding contribution in their field of expertise during its annual graduation ceremonies which will take place at Southampton Guildhall from 18-22 November 2013.

More than 2500 students will be graduating with degrees and professional qualifications in subject areas ranging from journalism to sport science, fashion to yacht-design, and business management to TV and film production.

Following Team GB’s success in the Olympics, it is now the turn of our Paralympians to go for gold in Brazil

Up for the Cup!

True advocates of a #LifeWithoutLimitations