The 2012 Superhumans advert was a major part of the overall feel of the coverage which intentionally took a strong and defiant tone in an effort to break stereotypes about disabled people and show parasport from a new, bolder perspective. 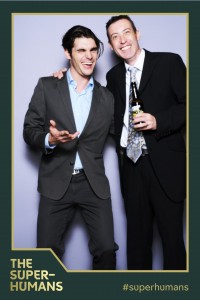 The new flagship advert features around 120 disabled people and is much less defiant in tone, instead inviting people to believe in the catch line of the Sammy Davis Jr song, ‘Yes I can’, to which it is set.

“Public Enemy was about strength and defiance, which fitted the job in 2012,” said Chief Marketing and Communications Officer at Channel 4, Dan Brooke, adding: “Now we want to be warm and celebratory and that fits with the point in the journey the Paralympic movement is on, to be mainstream and inclusive. But it also fits with Brazil, which has an image as a fun-loving upbeat place, the carnival aspect of Brazil.”

Able editor, Tom Jamison, who attended the premiere, said: “I loved the guts and defiance of the 2012 advert but many disabled people still find the idea of sport quite intimidating. Sure, there were still ‘Superhumans’ on show but the strength of the new advert is that’s it’s much lighter in tone, joyful even. It just makes you want to join the party!”

Meanwhile, Channel 4 has reinforced its commitment to diversity in announcing its new presenting team for the 2016 Paralympic Games which includes the largest number of disabled presenters ever seen on British television, many of whom were gathered at last night’s launch event in central London.

2016 is Channel 4’s Year of Disability, marking its commitment to increasing on and off-screen representation of disabled people across the schedule.

Channel 4 will broadcast over 700 hours of coverage across all platforms, including nearly 120 hours of live sport on television and a highlights package presented by Lee McKenzie available on All4 from 6am daily. At the heart of the coverage will be ‘The Last Leg’ hosted by the now familiar trio Adam Hills, Alex Brooker and Josh Widdicombe which will be broadcast daily at 8pm. Indeed, around two thirds of all on-screen talent during the Paralympics coverage will be disabled people including a few new faces including Breaking Bad’s RJ Mitte, broadcaster, Sophie Morgan and former marine commando, JJ Chalmers.

To watch the trailer, click play at the top of the article!