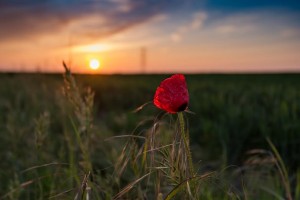 A person with Motor Neurone Disease and a limb amputee are among the winners of this year’s Disabled Photographers’ Society’s (DPS) annual competition, supported by Calumet Photographic.

Scott Sinden, 47, who was diagnosed with MND just two years after he retired said he was “shocked and surprised” to scoop a prize.

Brian Adam from Grimsby, who had part of his leg amputated said winning an award had given him “purpose” to get out of the house.

There were more than 150 entries and the winners were presented with a certificate and medal at an awards ceremony which took place at Calumet Photographic’s London store on Drummond Street.

Some of the shots will form part of the DPS Exhibition, which will be in place in store until Friday, November 25.

Scott’s winning image was of a solitary poppy, which he captured in front of a sunset.

Taking a picture so low to the ground was particularly challenging for the budding photographer due to the deterioration of his muscles, which is a symptom of MND.

He said: “It takes a lot of effort to take pictures because of my condition, so to be told I had won an award made me hugely proud.

“Photography has become a huge part of my life and gets me out of the house. Taking pictures has made me look at the world differently, as items or subjects that other people might find mundane, I might find hugely inspiring for my work.”

Brian, who is 72, uses crutches to move around but does not let that hold him back when it comes to his photography.

He said: “I loved the competition and it gave me a purpose to get out and about with the camera.

“I’ve always enjoyed taking natural history pictures and I am hugely honoured to have won a prize. Taking photos as an amputee can be challenging, but I like to think I’ve shown everyone that it is possible to follow your passion, even with a disability.”

His winning image entitled My First Paddle, was a close up of an avocet chick taken in Norfolk.

There were also prizes for Laura Hacking from Salford and Mike Pockney from Coulsdon in Surrey.

Jon Warner, Managing Director of Calumet Photographic, which has its head office in Tilbrook, Milton Keynes, as well as an online shop and eight stores across the country, said: “We are proud to be associated with DPS, an organisation that is constantly looking at new ways to embrace the latest digital technologies for people with disabilities.

“We have seen some incredible shots over the years, which have previously been submitted, but this year we feel the standard has been exceptionally high.”

Tom Molloy, Chairman of the DPS, said: “The competition is always extremely popular and we are always bowled over by the level of talent we see in the entrants.

“As a charity we try hard to make photography accessible to those with disabilities and we’ve found with a few simple modifications, we can open up a whole new world of possibilities to those who would otherwise struggle to operate a camera.

“We feel by holding this competition and exhibition it’s helping to show the world that having a disability does not and should not hold you back.”

The theme for this year’s competition was Open and Nature, with categories for digitally projected and traditional prints.

The competition was split between two levels of photographic ability, advanced and preliminary. Members were able to enter up to four images in each of the categories, in both digital and print format.

It also provides rentals, runs workshops, offers a student membership scheme, and has studio spaces available to hire for shoots.

The DPS is run by volunteers, mostly disabled photographers themselves.

It is mainly funded by membership and the sale of photographic equipment and books, kindly donated by both the general public and the photographic industry.

The Power of Diversity