Financial Ombudsman: What Happens When You Just Can't Get Through To Someone

Have you ever had problems being understood by your bank or getting your point across to your payday lender?

Being able to sort things out with a financial business that you have a problem with can be difficult at the best of times. But this can be made all the harder if you have a disability which impacts on the way you communicate with the world.

With all this talk of the “Equality Act” and “reasonable adjustments” it’s all too easy to think that many of the barriers to people with a disability like this no longer exist. But it’s not always as straightforward as it could be:

Take for example one customer we heard from who had hearing difficulties. She had a loan with a payday lender. She told them that things would be much easier if it could only contact her in writing. It was happy to do this, and all went well until the customer had difficulty in repaying what she had borrowed.

The loan was sent to a different department which called the customer to arrange repayment. Despite explaining again that she would prefer to have all contact in writing, the phone calls continued. These were often several times a day. This was really frustrating, and the customer couldn’t get her repayments sorted out which just made a situation, that could’ve been easily sorted out, much worse. 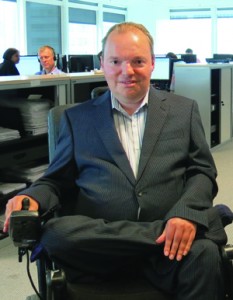 So What Can You Do if You’re in this Situation?

Nic Atkinson works at the Financial Ombudsman Service – the free service that receives all kinds of complaints about situations like the one above. We asked him for his top tips to make sure that your needs are met – and what you can do if you don’t think you have been treated fairly.

Whether you would prefer to receive letters, emails or information in an audio format, the easiest way for the business to know this is if you tell them directly. Businesses are obliged to make reasonable adjustments – but they can only do this if you tell them what you need. Whether it’s audio, visual, mental health or mobility difficulties, don’t be embarrassed about asking for a different method of communication

What Do You Need?

It’s not just about getting communications in a different form. Let the bank or insurer know if there is anything else that needs to be taken into account generally. For example, we recently dealt with a complaint from a consumer who told us that – following a head injury – they had difficulty with their short term memory. We were able to work around this, following up any phone calls with a letter to clearly explain what had been discussed. We could also include check lists of information he needed to send in to make things clearer.

Don’t Be Put Off

Last year, lots of people told us that they had been put off dealing with a problem because the business was “too difficult to deal with”. It can be daunting – particularly if you have already had a bad experience with a large organisation – but that’s where we can step in to help. All you need to do is give us all the information on what happened, however you like and we’ll talk you through the whole process. You don’t need to pay someone to help you, no-one can explain to us why you’re unhappy better than you!

So remember: if you do face a barrier with a bank or insurance company, and you don’t know where to turn, you can call the Ombudsman on: 0300 123 9 123. Or get in touch on: Twitter @financialombuds.