The Leon ST might be the estate car we’ve all been waiting for. Masses of space and more options to choose from than a mouse in a cheese shop.

According to one car salesperson I’ve spoken with, people get the wrong idea about the word “estate”. He didn’t elaborate on this, perhaps correctly reading my confused facial expression, giving grounds to the fact that I just wasn’t going to buy it. How can you get the wrong idea about such a simple concept? Estate in the context of cars means large and functional – and perhaps that’s the problem.

Seat has chosen to call the estate version of the highly praised Leon, the ST Estate. We’re all supposed to inherently understand that “ST” means ‘Sports Tourer’; now, honestly, if I was going to get the wrong idea or misunderstand a word or phrase it might be ‘Sports Tourer’. What sport and what kind of tour? Perhaps I’m nitpicking. I understand that Seat also insist on calling the Leon ST a ‘compact’ estate. Seriously – how does that help? Can you imagine asking a tailor to make you an ‘extra medium’ sized jacket?

This is the world we live in, where image or ‘concept’ is everything. Watch any television car advertisement and you’ll see what I mean. I suppose that ‘estate’ is a term sometimes used to describe cumbersome or heavy and less than fun to drive. In that case, Seat have got it dead right, the word estate doesn’t really help consumers fully understand what this car is all about.

So what sport then? Well, just about any; the interior space is astonishing. I reckon, without exaggeration that if you play any sport with equipment shorter than a javelin, this might be the car for you, but more of that later.

The exterior looks are really elegant. The swept back windscreen looks even more ‘swept’ on the long version of the Leon than it does on the saloon and the sculpting of the flanks look like crisp pleats and draw the eye right down the line. The fact is that whilst the Leon ST is the same height and width as the other Leon models, the ST is 27cm’s longer – and all of that extra length is behind the back wheels making for an estate car that looks far removed from cumbersome and somehow approaching ‘delicate’. 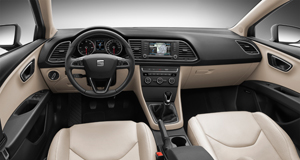 By comparison, the interior of the Leon ST does look a little plain. It’s comfortable but not refined which is a little disappointing. It’s the overuse of matt plastic that makes the interior just a bit dull and on some models fold down ‘picnic’ tray tables on the back of the front seats add a touch of easyJet rather than Learjet I’m afraid. The word estate, can also mean salubrious, a fact not forgotten by at least some of the competitor options.

The driving position is quite high and pretty comfortable and allows for good all-round visibility and there’s plenty of flexibility regarding the positioning of the steering column. Because the front doors are so wide, it’s a breeze to transfer from wheelchair to driver’s seat and back again.

The dashboard is also slightly plain with some of the controls miniaturised and added to the steering wheel. The usual controls are all but contained in the touchscreen and so the need for knobs and dials is largely redundant, making it handy for people with low finger dexterity or a short reach.

Once on the road the driving experience is nice and tidy. Even the diesel model handles tightly, helped, no doubt, by the fact that despite being quite a large frame the weight is only 1,233kg and as you would expect, it has a gutful of torque based on the 1.6 litre TDI diesel engine. The pull-away is smooth and solid and dispenses with any jerk, kick, surge or hindrance, doing exactly as commanded without argument, even at low revs. There’s a little road noise but it isn’t as distracting as you might think. The progressive steering system isn’t the last word in feel or fun but it is grippy and neat with just a slight hint of roll. It’s at this point that you note that the positioning of the dashboard is at the top of the facia and is therefore really well positioned to prevent the driver having to tilt or crane to see it properly, allowing for better concentration on the road ahead.

The extra 27cm’s of length I mentioned earlier doesn’t just benefit the exterior of the Leon ST, it also provides an increase in boot space of 55% on the saloon model. In fact it adds up to 587 litres or 1,470 litres when the back seats are folded down. Not only that but the front passenger seat folds down to give a load length of 2.5m – coincidentally, as I flippantly mentioned earlier – the exact length of a javelin. There’s even a drop down portion of the back seats that provides a through-load gap.

The interior boot space is really well thought out. Far from grasping every last niche, the walls are flat-sided allowing large items to be shunted around without the annoyance of catching on protruding oddments. Furthermore, the back seats don’t require the graft and broken nails of trying to get them to lie down; a simple lever makes them docile enough to drop with the other hand. 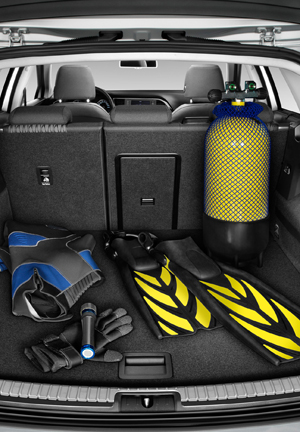 It isn’t just the scale of the Leon ST’s interior that means it’s like having two boot spaces. The split level depth is also very handy if you want to prevent items sliding around or colliding with each other. This is going to be especially useful if you need to ensure that things won’t slide out of reach. The truly massive parcel shelf can also be placed in several positions to reconfigure the layout of the boot for different purposes.

The default boot mode (as such) is also really helpful for anyone of short stature or wheelchair users since there’s no discernable ‘lip’ between the door aperture and the floor. In other words there’s no balancing shopping on the lip before dropping it and hoping that it lands the right way up. Similarly, you won’t struggle with having to scoop your whole arm in, pulling your shoulder to get stuff out again.

At first glance, the dashboard doesn’t look exactly all-singing and all-dancing but this is something of a deception. Certainly if you purchase the technology pack it’ll include quite a bunch of goodies. The 5.7 inch touchscreen includes a DAB radio and Sat Nav controlled with voice recognition and there are other hidden helps too. Lane assist technology will help you to retain your place within the lane markings if you have a moment of daydream or an especially vigorous sneeze but perhaps, predictably, it is a little bit wobbly and uncertain. The ST will also politely remind you to take a break if the tiredness recognition sensors deem you to be not at your best; the blind spot monitor doesn’t excuse you from checking over your shoulder but will provide a backup if you can’t twist so far around (or you forget).

Radar guided cruise control and electronically controlled dampers, connected to intelligent braking will stop you from doing anything too rash. In fact, all told, all you have to do is point the Leon ST in the general direction of your destination.

The Leon ST has the same chassis as the Golf estate, utilising Volkswagen’s MQB platform, hence why it’s so light and hence also why it’s very economical to run, as well as being emission friendly (it also has fume saving stop/start technology, of course). It’s almost as if the huge storage capability invites you to add the weight yourself to bulk it up a bit.

What we’ve got here is a package that brushes up the basics to a more than presentable level but that doesn’t attempt to go over the top. There’s something very pleasant about that, honest even. Yes, this car is cheaper than favourite competitor, the Skoda Octavia estate but I don’t rate it as the poor man’s alternative. This is a car designed along the lines of a belated New Year’s resolution – practical, equipped, clean living and ready for a challenge.

It’s hardly a surprise that Seat sales rose by 14% in 2013. It’s something of a free bet that the Seat Leon ST Estate is going to be a big hit on Motability.

A 35 year old driver, living at an NG16 post code in Nottinghamshire with no claims or convictions, and basing it on five years NCB, could expect a fee of around the £350 mark for the Seat Leon ST Estate with hand controls fitted.

Here are a few alternatives (also available on the Motability Scheme) to consider:

The Octavia Estate does not feel completely at home around town, being far better suited to the open road. Here you’ll find that the steering is nice and tight and that as an all-round drive it’s stable and reliable, if lacking slightly in driver feel. 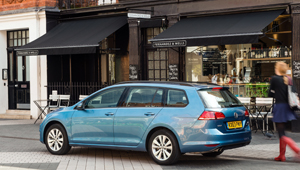 Perhaps the front-runner in the aesthetics stakes, the VW Golf Estate also makes for a practical choice. Good boot space and good equipment spec, plus a few goodies on top make it a definite consideration. 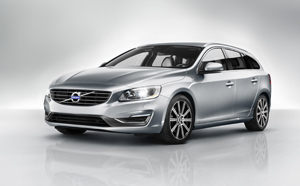 The driving experience can feel a little bit firm resulting from the rather stiff suspension. The steering takes some getting used to with some critics saying that it reacts too quickly for a smooth drive.

My apprenticeship with Motability

Worry-free motoring options available this winter from the Motability Scheme

WHAT THE MANUFACTURERS SAY…

One Big Day events are back! Kicking off with The Big Event in May