You might think that a city whose history tells us that it is built on seven hills wouldn’t be a great place for disabled people, yet, as we start to investigate we see plenty of evidence as to why it is also described as a ‘dear green place’.

Glasgow has many claims to fame: so called ‘second city of the Empire’ and apparently the only city to have won the ‘Curry Capital of the UK’ four times. Most recently, of course, it has been applauded for putting on one of the best Commonwealth Games in recent memory.

Indeed, for disabled people, the 2014 Games were a great reason to update not just some of the city’s infrastructure but also attitudes towards access and facilities.  The opportunity to host the Games was embraced by the entire city and hopes were that the legacy of the event would mean further opportunities for people, businesses, organisations and communities in Glasgow.

Of course, the Games were held just over a year ago and so it’s very difficult to fully assess if the dreams of legacy have been realised. The Glasgow hosting bid was part ‘ready to roll’ and part ‘regeneration’ with some 70% of venues already in place. Saying that, much of the infrastructure was refurbished to high standards (of access and facilities). The impact of hosting the city and the pride Glaswegians took in welcoming the thousands that came as a result of the Games shouldn’t be overestimated and were to some extent groundwork for further economic, social, cultural and environmental development of Glasgow.

Glasgow doesn’t have an entirely positive reputation. In her book ‘The Tears That Made The Clyde’ author, Carol Craig argues that industrialisation caused a general breakdown of family life because of a dominance of masculinity. Oddly, more than a generation after the boom times enjoyed by the industrial sector vanished there is still the mystery as to why Glaswegians are statistically likely to experience earlier than average mortality.

It isn’t all doom and gloom and the stereotyped descriptions of the city need to be somewhat re-assessed, not just in light of the success of the Commonwealth Games but generally.

Disabled residents of Glasgow will talk about a generally accessible city and will happily explain, for example, that the city centre’s two main shopping thoroughfares are pedestrianised and that they, along with two excellent shopping malls (the Buchanan Galleries and St Enoch Centre) are largely accessible. Perhaps, as a result of the proportion of disabled people in its population, Glasgow makes a great deal of effort to provide suitable access and facilities. 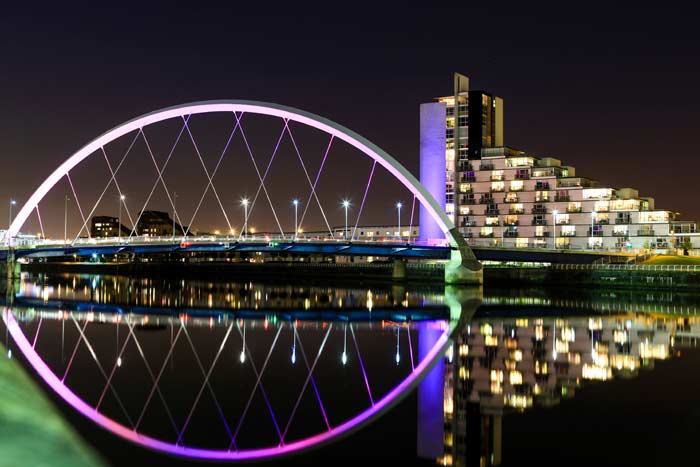 A very good fish restaurant with excellent access and disabled toilet facilities. There is on-street blue badge parking nearby.

People with mobility impairments should ask for a table on the ground floor when they book but will find the staff very helpful, good facilities and blue badge parking.

Good ground floor access from the street and a spacious restaurant and clean accessible toilet.

The large branch of Starbucks on Buchanan Street has level access into and around the café, tables suitable for wheelchair users and an accessible toilet. Caffè Nero on Hope Street also has good access and is very convenient for Central Station. Costa Coffee on Bothwell Street also has decent access.

Glasgow is well known for its vibrant arts scene…

House For An Art Lover,

Level access inside and around the grounds of the building, with designated disabled parking, although there is a bit of an incline from the house to the car park.

Entry is via a heavy door and this can be difficult to open for anyone with upper body impairment.

Project Ability is a Glasgow-based visual arts organisation and gallery. They create opportunities for disabled people as well as people with mental health issues aged five years to 80 plus, to express themselves and achieve their artistic potential.

Right in the centre of Glasgow, this is one of the most frequently visited galleries in Scotland. Inside it’s spacious and easy to get around. 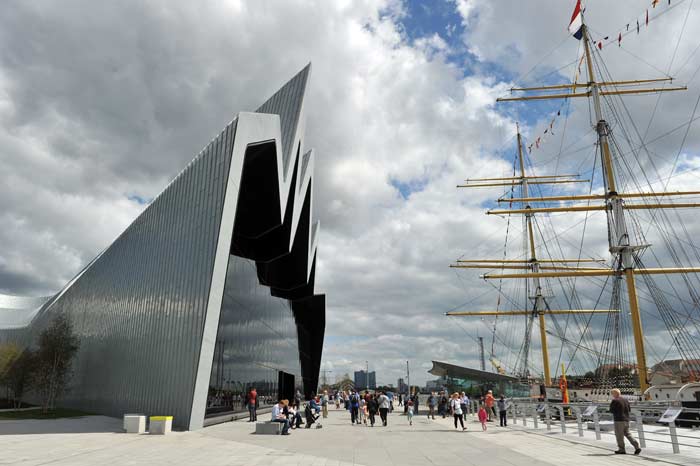 This is one of Scotland’s newest museum buildings, opened in 2011 to house and display items previously kept at the city’s old transport museum. It is accessible throughout and has excellent facilities.
www.glasgowlife.org.uk/museums/riverside/

The museum houses one of Europe’s best art collections amongst other galleries packed with an eclectic mix of artefacts and treasures. According to Glasgow Museums it is amongst the top three free-to-enter visitor attractions in Scotland and one of the most visited museums in the UK outside of London.

There’s plenty of space to get around and access and facilities are generally pretty good even though some of the experiments can only be undertaken from a standing position.

Changing Places in Glasgow can be found at:

This is one of two major stations connecting Glasgow with the rest of Scotland (and the UK). Access is very good although signage for the accessible toilet could be better. It is located on your left as you exit the ticket barrier on the upper level.

This is a major railway station and although it is accessible and has decent facilities (including lifts to the lower level) it does get very busy indeed.

All vehicles belonging to the Glasgow Taxis firm are wheelchair accessible and their drivers are externally trained and assessed by council-approved assessors to ensure they are able to provide the best possible taxi service for disabled people.

Taxi drivers will assist with wheelchair access and will ensure that wheelchairs are properly and safely secured before setting off on a journey, assisting passengers to disembark at the other end too.

Taxi drivers are also trained to help people with moderate walking difficulties, as well as those with impaired vision or hearing

The Glasgow subway is an excellent way to get around the city and its outskirts but despite its recent refurbishment has not been made accessible for wheelchair users. Wheelchairs are allowed onto the carriages but only if folded (but there are no lifts to the platforms).

There are other accessible features though including amplification equipment at ticket offices for hearing impaired people. Assistance dogs are welcome and there are instructions for navigating stations at www.describe-online.com and basic details about stations, such as the number of stairs on the SPT website.

Scotland’s Able have contacted SPT to ask why the subway isn’t accessible despite its recent refurbishment. We’ve also contacted the Scottish Minister of Transport, and Glasgow City Council to see what they have to say.

We’ll bring you the latest on our campaign in the next issue.

Opening Up A World Of Books

10 Tips for Embracing Your Education and Employment Journey

Getting a head start in sport